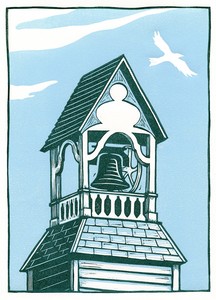 In anticipation of the upcoming 2020 centennial of passage of the 19th Amendment of the U.S. Constitution granting women the right to vote, the Bird Homestead and Meeting House Conservancy will present a two-part lecture series this fall on pioneers of the women's rights movement. "Breaking Barriers: Two Women of Seneca Falls, Elizabeth Cady Stanton and Eunice Newton Foote" will start with a talk by Coline Jenkins, Stanton’s great-great granddaughter. She will speak on the life and work of her famous ancestor on October 26 at 3 pm at the Meeting House on Milton Road.

Stanton was one of the main organizers of the 1848 convention held in Seneca Falls, New York, calling for women’s rights. She was the author of the Declaration of Sentiments, the foundational document of the movement adopted at the convention. It was Stanton who insisted that the Declaration include the right to vote (elective franchise), when others hesitated to go that far. She prevailed.

Three years later she met Susan B. Anthony, and the two worked together closely for decades to promote the cause of women’s suffrage. Neither woman lived to see the passage of the 19th Amendment finally giving women the vote in 1920.

Ms. Jenkins is the President of the Elizabeth Cady Stanton Trust, which is dedicated to preserving the history of the women’s rights movement, to educating the public on this history, and to promoting the advancement of women’s rights. The Trust holds a collection of 3,000 historical items relating to women’s suffrage.

Ms. Jenkins, who grew up in Rye, has a personal history with the Rye Meeting House. Her mother, Rhoda Jenkins, was an original member of the Rye Friends Meeting. She was the architect, when the Friends repaired and rehabilitated the building (formerly an Episcopal chapel) c. 1960 for use as a Quaker meeting house.  Ms. Jenkins attended First Day School (Sunday School) at the Rye Meeting House as a child.

This program is supported in part by a grant from Humanities NY.