Rye Athletes Performing Well Across the Board 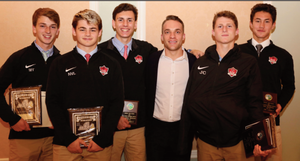 Congrats to these Rye athletes!

● The boys varsity soccer team received a number of awards at the All Section awards dinner (see caption above for individual honors). They also received the Section 1 sportsmanship award given by the Athletic Administrators Association

● All of Rye High School’s fall varsity sports teams received Scholar Athlete Team Awards from NYSPHAA, the New York State Public High School Athletic Association. To earn the moniker, a team’s average GPA for 75% of the roster must be greater than, or equal to, 90

● In her debut race, freshman Leyla Murati broke Rye’s 9th grade school record for the 600M and placed second at the Section One Kickoff Meet on December 8