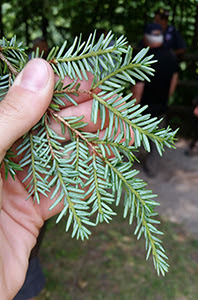 With its deep green, flat and stubby needles and its small cones, the eastern hemlock (Tsuga canadensis) is a familiar sight in many parts of New York State. But don't be fooled by its sometimes-scraggly shape. The eastern hemlock tree plays an irreplaceable role in New York's forests. In warmer months, hemlock stands provide cool shade for wildlife seeking refuge from the heat. The shade created by hemlocks along streams also maintains the cooler temperatures necessary for many aquatic species, including our native brook trout.

In the eastern U.S., our hemlocks are susceptible to attack by hemlock woolly adelgid (HWA), an invasive insect. HWA feeds off hemlocks and damages its host tree by disrupting the flow of nutrients to the tree’s twigs and needles. HWA can be difficult to see because of its small size, so infestations are best identified by the white, woolly masses the insects create to protect themselves and their eggs. The woolly masses can be most easily seen from November through April and are found at the base of the needles on infested hemlock trees. For HWA identification information and photos, or for details on how to report HWA, visit our website. Want to get involved in protecting hemlocks? Volunteeer with the New York State Hemlock Initiative.

Photo: One way to help identify the eastern hemlock is by the two parallel white stripes on the underside of each needle.