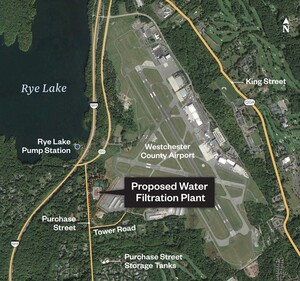 Westchester Joint Water Works (WJWW), a nonprofit public benefit corporation responsible for maintaining a drinking water system for up to 100,000 Westchester County residents, has completed the Final Environmental Impact Statement (Final EIS) for a proposed $138 million drinking water filtration plant to be built in the Town/Village of Harrison. At its Sept. 28 board meeting, WJWW, as lead agency, deemed the Final EIS to be complete.

The Final EIS was prepared in accordance with the New York State Environmental Quality Review Act (SEQRA). The document incorporates the Draft EIS for the Rye Lake Filtration Plant and responds to comments received following issuance of the Draft EIS in April. Both documents were prepared by WJWW in collaboration with an expert team of environmental engineers, scientists, planners, architects, government agencies and legal specialists.

The Final EIS includes a summary of the project, a timeline of the environmental review process, all substantive comments regarding the project received at the Draft EIS public hearing and during the comment period, and a response to each comment. The document also contains public hearing transcripts, copies of all written comments received regarding the Draft EIS, as well as technical reports and data referenced in the responses. The documents are available at www.wjwwfiltration.org.

The Draft EIS identified and examined all potential environmental impacts of the proposed project, both positive and negative, and considered project alternatives and potential measures to mitigate any identified negative impacts. The Draft EIS concluded that the proposed project would comply with the land-use regulations of existing zoning, and that no significant adverse environmental impacts were anticipated.

The proposed project calls for the construction and operation of a 30-million-gallon per day Dissolved Air Flotation/Filtration (DAFF) plant in the Town of Harrison on 13.4 acres of land with access to Purchase Street and directly adjacent to existing water transmission facilities located beneath the Purchase Street right of way. The land, currently owned by Westchester County, is planned to be apportioned from the Westchester County Airport property in exchange for a deed from WJWW for an equivalent 13.4-acre parcel it owns nearby. The exchange will result in no net loss or gain to Westchester County or WJWW.

Completion of the Final EIS is an important step forward in the process aimed at meeting legal obligations for filtration of WJWW’s raw water source at Rye Lake. In accordance with orders issued by New York State Supreme Court and the U.S. Environmental Protection Agency, the plant is mandatory for WJWW’s system to meet surface water treatment requirements including control of harmful levels of disinfection by-products, including haloacetic acids, or HAA5. The filtration plant would have the capacity to filter the maximum day water supply demand of WJWW’s entire water distribution system.

Traces of HAA5 have been detected in the Rye Lake water supply system. HAA5 compounds are a common by-product of the water disinfection process, as they form when chlorine reacts with naturally occurring organic matter in untreated surface water from the Rye Lake source. Chlorine is the most commonly used disinfectant among public water suppliers to kill bacteria and viruses that could cause serious illnesses. Filtering the water is a proven treatment to remove organic matter and thereby reduce the formation of HAA5 compounds. Long-term exposure to high levels of HAA5 has been linked to an increased risk for cancer.

“Westchester Joint Water Works has been working closely with our team of professionals to ensure a transparent and effective process to complete the assessments and provide responsive analyses now included in these documents, which stand as evidence of our commitment to a thorough environmental review of this crucial project,” said Paul Kutzy, WJWW Manager. “Our priority is the health and safety of the residents in our member municipalities of Harrison, the Town of Mamaroneck and the Village of Mamaroneck, and we understand the urgency to move this project forward to provide safe drinking water to our community.”

Following completion of the Final EIS, there is a statutory 10-day waiting period to allow agencies and the public to review the document. WJWW is then expected to issue its Findings Statement, which is the final step in the SEQRA review. The WJWW Board has a scheduled meeting on Wednesday, Oct. 12.

Westchester Joint Water Works (WJWW) is a nonprofit public benefit corporation formed in 1927 by its three member municipalities: the Village of Mamaroneck, the Town of Mamaroneck, and the Town/Village of Harrison pursuant to the provisions of Chapter 654, Laws of 1927, State of New York to acquire, construct and provide a joint water works. WJWW supplies water to its member municipalities and to portions of the cities of Rye and New Rochelle, serving 59,629 consumers through 14,682 service connections. WJWW also supplies water on a wholesale basis to the Village of Larchmont and Veolia (formerly Suez Water Westchester), which sells water to the City of Rye, Village of Rye Brook and Village of Port Chester. In all, WJWW provides drinking water to up to 100,000 residents and other consumers in Westchester County.