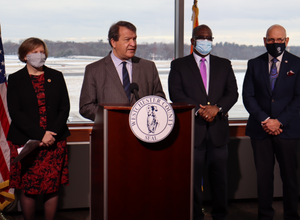 To that end, Latimer announced that the upgrading of all the permanent airport noise monitors have been completed and integrated with the complaint handling system. These fixed noise monitors are in addition to the portable noise monitors that had previously been added based on where the majority of the noise complaints had been originated from. Latimer also announced the Board of Legislators authorization of his request for a $3.75M bond act to complete remediation measures at Outfall No. 7 as part of the County’s Storm Drain Replacement project at the airport. This project is in accordance with the consent order issued by the State’s Department of Environmental Conservation.

Latimer said: “The Westchester County Airport is a major economic driver for our region and it is imperative that we as the County make efforts to ensure its surrounding neighbors are protected from its environmental impact. In 2018, I made promises on key areas of this balance. I am proud to say my Administration has kept those promises while also ensuring all stakeholders have a seat at the table.”

County Legislator Nancy Barr said: “Many Westchester residents enjoy the convenience of having a local airport but the health, safety and quality of life of our residents must be protected.  Effective monitoring of air, water and noise pollution allows us to identify problems before they become more difficult and expensive to resolve.  I appreciate the County Executive’s willingness to work with me and all stakeholders to protect not only the airport’s direct neighbors and those in the flightpath, but everyone who cares about the quality of the water they drink and the air that they breathe.”

In August of 2018, Latimer outlined numerous key goals he set following his administration’s unprecedented public hearing process on the airport. The goals focused on areas of noise, air quality, water quality and the airport’s master plan and supplement.

Westchester County Airport Advisory Board (AAB) Chairman Nicholas Hartman said: "I am pleased to see the County making these investments in the airport's environmental programs. The AAB provides a consistent and open mechanism for residents and other airport stakeholders to provide valuable community input on all matters related to the airport. These investments further enable high-quality data collection on noise and other environmental factors. That in turn drives focus on where action is needed and provides consistent measurement on the impact of environmental improvement efforts implemented to date."

Coalition to Prevent Westchester Airport Expansion Chairman George Klein said: “The Coalition to Prevent Westchester Airport Expansion strongly supports the Latimer administration’s initiative on construction of Outfall No. 7 at our airport with associated soil remediation, which will protect drinking water in the Kensico Reservoir from PFAS contamination at the airport.”

On air quality, the County has completed its air emissions inventory and - compared with 2007 base numbers - found significant reduction in air emissions due to reduction in total number of flights combined with airport improvements.

On water quality, the County has reinstated – through a Latimer Executive Order - its ongoing water testing and monitoring program and PFAS site characterization and remediation is underway in compliance with NYS DEC consent decree. Additionally, ongoing improvements to the County’s deicing program, including increased holding tank capacity, implementation of terminal side improvements and plans for west side deicing facility, are all underway.

In 2018 following extensive dialogue with key stakeholders, Latimer voluntarily reinstated groundwater testing at the Westchester County Airport for pollutants after the testing program was discontinued in 2011. The program was discontinued without approval of the Board of Legislators or notification to the public. PFAS are a class of toxic contaminants, previously used by firefighters during training, which pose an emerging threat to drinking water in many areas of the country.

Lastly, on the master plan supplement, the County was slated to begin its new round of public comment – with numerous public hearings planned – right as the first cases of Covid-19 pandemic hit. Latimer believes that a robust, in-person community engagement process is critical to the success of the Master planning efforts.  As soon as it safe to do so, the County will be announcing dates for those public participation sessions.