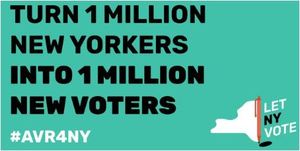 Today, the New York State Senate passed Automatic Voter Registration (AVR): a process that would register or pre-register eligible New Yorkers to vote when they interact with a government agency (i.e., the DMV, Department of Health), unless they opt out. AVR was part of package of election reform bills that included poll sites on college campuses and reforms to early voting.

Currently, there are 1.1 million New Yorkers who are eligible to vote, but remain unregistered. AVR would streamline the registration process, making it easier for eligible New Yorkers to vote. Since 2015, 16 states and Washington DC have already implemented some form of AVR.

"It is exciting that the Let NY Vote coalition started 2020 the same way we did in 2019: by standing with the State Senate as our priorities passed. Automatic voter registration will streamline the way eligible New Yorkers register to vote, while providing adequate safeguards to protect the most vulnerable populations. Now the Assembly must follow the Senate's lead and bring New York in line with the 16 other states that already have some form of AVR. We can't wait, it's time to let New York vote!" said Susan Lerner, Executive Director of Common Cause/NY and co-founder of Let NY Vote.

In January 2019, the Let NY Vote coalition led the successful campaign to overhaul the state's outdated and antiquated voting laws. The Legislature passed - and Governor Cuomo signed into law -- early voting, consolidation of primaries, pre-registration of 16 and 17 year olds, and registration portability, which allows New Yorkers who move within the state to have their voter registration automatically updated via the USPS.

Automatic Voter Registration benefits historically disenfranchised communities like veterans, low-income people who have regular contact with the government, and young people who are often transient. This year, 1 in 10 Generation Z and close to one third of Millennials will be eligible voters in the country. Studies show that voting is habit forming: a person is more likely to vote in the next election if they voted in the one prior. By making voter registration opt-out, instead of opt-in, AVR increases registration rates and encourages eligible voters to participate in our elections. AVR also keeps the voter rolls more accurate, since voters update their registration information (like their address) when they interact with state agencies.

Automatic voter registration will also save money by cutting down on mail costs since all transfers are electronic. This will also reduce handwritten errors and mistakes from election officials.

"Stringent voting laws in New York have historically made our state one of the hardest places for people to cast a vote," said Perry Grossman, Senior Staff Attorney for the New York Civil Liberties Union's voting rights project. "Obstacles to the polls particularly impact low-income New Yorkers of color and have made for an exclusive democracy that represents some rather than all. With today's passage, New York has taken an enormous step forward in creating a more inclusive democracy by making it much easier for people to vote," said Erika Lorshbough, Asst. Dir. for Legislative Affairs at NYCLU.

"We are excited to see that the State Senate is recognizing the importance of expanding our democracy with this package on the first day of session. In particular, automatic voter registration and mandating on campus poll sites are key steps to breaking down barriers to participation for young voters. We hope that this is followed by continued action to protect youth voting rights and expand democracy for the next generation of voters," said Brianna Cea, CEO and Co-Founder of Generation Vote.

"Indivisible groups across New York are thrilled that the Senate has passed automatic voter registration. This measure is critical to making New York a leader in voting rights nationwide, during a time when voter suppression and election security are national concerns," said Lauren Boc, the State Policy Manager of Indivisible Project.

"We are proud to once again be a part of passing a historic package of election reforms to modernize voting in New York State. This package of reforms will further empower voters and ensure maximum voting accessibility in all regions of New York State. Thank you to the Senate for passing these comprehensive voting rights reforms," said Jennifer Wilson, Deputy Director of the League of Women Voters of New York State.

"For generations, communities of color have suffered from a voter registration gap that has reinforced our under-representation in New York's political system," said Javier H. Valdés, Co-Executive Director of Make the Road New York. "Automatic voter registration will be a key tool for addressing that deficit and ensuring that our communities are registered and heard."

"The New York Senate should be commended for leading the way on democracy reform. The combination of automatic voter registration, early voting and other key election reforms implemented in New York will break down barriers to voting and provide a path for all communities to have a voice in our democracy. We urge members of Congress to take note of the progress being made in New York and enact these reforms on the national level by passing the For the People Act (HR 1)," said Christine Wood, Democracy Organizer at Public Citizen.

"Automatic Voter Registration is the next important step in electoral reform. Our democracy is strengthened when we expand enrollment and increase voter participation. I applaud this important reform and call on the state legislature to make it law," said Stuart Appelbaum, President of the Retail, Wholesale and Department Store Union (RWDSU).

"Last year, New York saw a number of crucial pro-democracy reforms become law and we are pleased to see that work continue in 2020 with the passing of Automatic Voter Registration in the Senate, today. This law will allow more voters to participate in the electoral process. In states where this reform has been implemented, voting rolls have become more accurate, and states have saved money. With some of the lowest voter turnout numbers in the country, New York must take all possible steps to make voting more accessible," said Betsy Gotbaum, Executive Director of Citizens Union.

"Why are we letting a piece of paper--the voter registration form--stand in the way of allowing citizens to participate in democracy? If you are eligible to vote, you should be able to vote. Voters shouldn't have to jump though hoops just to exercise their fundamental rights. Automatic Voter Registration serves to eliminate one of the biggest hoops and helps to bring more people into our democracy," said Erica Cohen of Brooklyn Voters Alliance.

"Historically, New York's antiquated election laws barred low-income voters, voters of color, and newly naturalized voters from exercising their rights and ultimately, from accessing power. Asian Americans and Pacific Islanders are eligible to register to vote at higher rates that many other naturalized groups -- but a lack of language access, tailored resources, and direct outreach prevent many would-be voters from fully participating in our democracy," said Amy Torres, Director of Policy & Advocacy at the Chinese-American Planning Council (CPC). "Last year, the legislature closed a historic wave of voting reforms with a promise to pass Automatic Voter Registration at the start of session. Today's package of voting bills demonstrates that New York is not yet finished passing bold, progressive reforms that unlock political potential for people across the state."

The Let NY Vote coalition has been demanding common sense voting reform in New York for years such as: