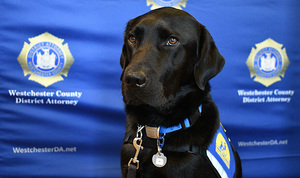 Westchester County District Attorney Anthony A. Scarpino, Jr. is introducing the Office’s first “facility dog,” Lewis is specially trained to work with victims and witnesses to help relieve their stress during the criminal justice process. Lewis will help make what is often a traumatic and stressful experience a bit easier for those who, through no fault of their own, find themselves involved in our criminal justice system. As of mid-September, Lewis became a full-time member of the DA staff.

DA Scarpino explains, “For witnesses and victims, sitting through interviews and preparing for trial is a very stressful time, especially for child witnesses, victims of domestic and elder abuse, and victims of sexual assault. Retelling and reliving those moments can be extremely difficult. Medical professionals have confirmed that having a dog to comfort them, whether in meetings or in court, can help relieve that stress. We are delighted to bring this extra special level of care to those who need it most. Lewis is a great addition to our Office and the work we do for the people of Westchester.”

Lewis is a 2-year-old Labrador retriever and his trained handler is Assistant District Attorney Brian Bendish of the Superior Court Trial Division. Bendish took three weeks of specialized training to bond with Lewis and learn the 40 advanced commands Lewis responds to. The training consisted of intensive lectures, hands-on training, and multiple examinations in order to acquire public certification. Training is ongoing, requiring strict consistency and structure implemented by ADA Bendish to ensure Lewis adheres to his trained behaviors. As part of his work, Bendish will attend all appointments with Lewis, issue his commands, and oversee the dog’s daily needs.

ADA Bendish said, “Lewis is an exceptional animal. He is amazingly calm and sweet. He is trained not to approach anyone unless he is told to. I really look forward to seeing how his easy demeanor will de-stress situations for our victims and witnesses. I am really excited to continue to integrate Lewis into the DA’s Office and let him do this important job going forward. I think he is just a great addition to our Office.”

Lewis was raised and trained by the nonprofit Canine Companions for Independence and has been granted to the Westchester County District Attorney’s Office free of charge. It’s estimated that his two years of training and that of his handler costs roughly $50,000, paid for by donations to Canine Companions. The cost of his ongoing care and feeding is being taken care of by private funds within the Office. Every Division is delighted that Lewis is onboard. Canine Companions is the nation’s first and largest service dog organization, training dogs for special service roles since 1975.

“Canine Companions is thrilled to be partnering with the Westchester County District Attorney’s Office. Our continued connection working with our NYS District Attorneys is exemplified by the newest addition of Facility Dog Lewis,” said Debra Dougherty, Executive Director, Canine Companions for Independence Northeast Region. “Facility Dog Lewis’s sweet and very loyal demeanor paired with his handler will be a huge asset to their community, working with vulnerable victims and witnesses. Lewis will bring much-needed smiles and support to families in the criminal justice setting, as well as bridging a much-needed gap between the community and the system.”