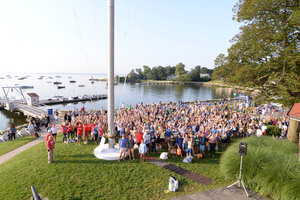 It has been a banner summer for Swim Across America Long Island Sound Chapter (SAA-LIS), which recently held seven fundraising pool swims and an open water swim to raise funds for cutting-edge cancer research, prevention and treatment, as well as support services through Westchester-based Cancer Support Team. This year the SAA-LIS chapter has exceeded its past record, raising $1.3 million with donations continuing to come in daily.

“It has been a record-breaking year for SAA-LIS, and I couldn’t be prouder of the hundreds of swimmers, kayakers, and volunteers who have given so much of their time, energy and passion to help in the fight against cancer,” says Tony Sibio, executive director of SAA-LIS. “Everyone involved understands that cancer doesn’t discriminate and that their contributions help make cutting-edge research possible. They are giving hope to those with cancer and making a real difference.”

Donations are welcome throughout the year and can be sent to SAA-Long Island Sound, P.O. Box 217, Larchmont, NY 10538.

About Swim Across America

Swim Across America, Inc. was founded in 1987 and has raised over $70 million for cancer research and prevention programs at the country’s finest hospitals and managed-care facilities.  Since Swim Across America’s inception, it has grown from having a single event in Nantucket, MA, to 15 open water benefit swims across the country and 100 annual pool swims.

The Long Island Sound chapter was started in 1992 and has grown to be the largest in the organization, having raised over $19 million since its inception and $1.3 million in 2019 alone.