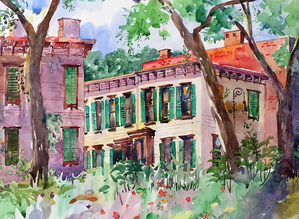 Born in New York City, Emily Stedman’s family moved to France when she was in first grade. The family moved fairly often and she lived in a number of places while growing up, including Swarthmore, PA, Tenafly, NJ, and Hartford, CT.

“My watercolor paintings are about capturing an emotional story, based on observation of the natural world”, said Stedman. “I rely on collective memory and the everyday world for sources. The stories are fantasies that might have existed and people whom I may have met along the way.”

Working in watercolor gives the artist the opportunity to work quickly, directly and spontaneously—there is no mechanical process or grand theory between her and the finished image. “I begin with my sketchbook, which is the source for later inspiration and the capturing of an idea”, Stedman said. “From there I travel wherever the work takes me, whether it becomes the story of a certain personality or even an ancient village somewhere in the mind’s eye.”

Emily Stedman received a B.F.A from Illinois Wesleyan University in Bloomington, IL, and an M.F.A. from Pratt Institute in Brooklyn, NY, where she studied under Jacob Lawrence.

For more information about Emily Stedman, visit her online at www.emilystedman.com