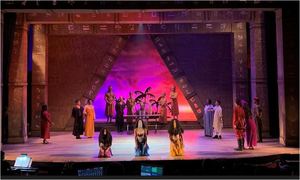 Winner of four Tony® Awards, Elton John & Tim Rice’s AIDA is an epic tale of love, loyalty and betrayal, with an exhilarating Tony and Grammy Award winning score by Elton John & Tim Rice.  An enslaved Nubian princess, Aida (Kim Onah), finds her heart entangled with Radames (Jordan Bollwerk), an Egyptian soldier who is betrothed to the Pharaoh’s daughter, Amneris (Kristin Wetherington).  As their forbidden love blossoms, Aida is forced to weigh her heart against the responsibility that she faces as the leader of her people.  Aida and Radames’ love for one another becomes a shining example of true devotion that ultimately transcends the vast cultural differences between their warring nations, heralding a time of unprecedented peace and prosperity.

ELTON JOHN & TIM RICE’S AIDA is a WPPAC Mainstage Production which is a professional production featuring union and non-union actors from Broadway, national tours and regional theatre across the country. These productions are created from scratch, staffed with professional production teams (directors to designers), large LIVE orchestras and boast high-quality sets and costumes.

Professional Theatre in the Heart of Westchester County

Featuring songs by the team behind THE LION KING and winner of four Tony Awards, AIDA is set in ancient Egypt and tells the story of an enslaved Nubian princess, her conflicted Egyptian captor, and a forbidden love that rocks the ancient world to its core.

We can’t wait to see you in the audience!

Visit www.wppac.com for tickets and the performance schedule.