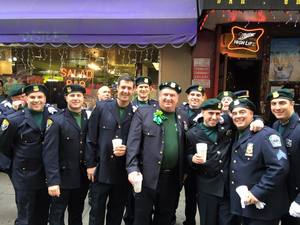 A revolution for Independence, 2 world wars and every horrendous type of weather imaginable couldn't stop the Irish from showing their pride and marching up 5th Avenue every 17th of March for the last 250 some odd years but it appears as though the Irish are no match for the Coronavirus known as CORVID-19.

Earlier today Mayor DeBlasio, who had indicated he was contemplating cancelling the parade but said would he would lean heavily on the advice of the parade organizers, has done just that and cancelled the annual trek up the Avenue according to several news reports. However, there has been no official word from the parade organizers.

Mayor Bill de Blasio would not confirm the parade's cancellation during a Wednesday afternoon press conference, stating that the city is "waiting for confirmation" and didn't want to reveal details of a "private discussion."

Governor Cuomo said "Why would you risk bringing thousands of people together knowing that this is a virus that easily communicates," Cuomo does have the authority to shut down the parade without the Mayor's approval and had earlier indicated that he was leaning in that direction.

City Councilwoman Carolina Rivera (D-Manhattan) told the NY Post earlier this afternoon that the parade would NOT go forward.

There are 53 confirmed cases of the virus in the 5 boroughs at this time but over 200 statewide.

Almost 2 million spectators were were expected to line the parade route to watch the almost 150 thousand parade participants Tuesday but out of an abundance of caution that wont happen now. There is currently no further information available regarding a possible rescheduling of the parade such as what the City of Yonkers did earlier this week They have rescheduled their parade for Sept 19, 2020.