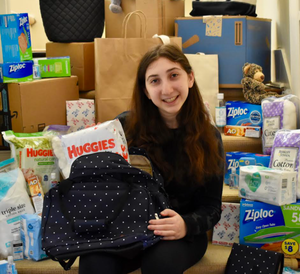 Ariel created the 501(c)3 non-profit organization to raise money to purchase diaper essentials for new mothers who come to the United States. While a number of charities, like diaper banks, provide diapers to low-income new mothers, Ariel discovered that there is a gap when it comes to other essential diaper supplies such as diaper bags, baby wipes, changing pads, and anti-rash products. Ariel formed DENA to fill this gap for new Americans, who often lack not only the means to buy these supplies, but often also the knowledge to seek them out.

DENA works with immigrant and refugee service groups to get these essential baby products into these new mothers’ hands. In only a few months, DENA has rapidly expanded and has partnered with four refugee organizations including IRIS (Integrated Refugee & Immigrant Services), the first organization to sign on, located in New Haven, to which it sends diaper essentials to be distributed to the new mothers they serve in Connecticut. Ariel expects to sign up a half dozen new partners in the coming months, focusing on organizations located in Connecticut, New Jersey and her home state of New York.

Working with other high school volunteers across the tri-state area, Ariel is focused on making sure that 100% of raised funds go to purchase the DENA “starter diaper bag kits.” She is working with Google’s Nonprofit initiative and has obtained a $10,000 per month Google Ad allowance to minimize marketing costs.

As the daughter of refugees herself, this project is personal for Ariel. She knows how much her own refugee family benefited from others who chose to help them start their life in America. DENA is part of the way she’s hoping to close the circle and give back to a new generation of those in need.

Ariel came up with the idea last summer while volunteering at IRIS, where she continues to volunteer, preparing teaching tools for immigrants and refugees. After preparing a presentation on diaper bags, she realized that diaper bags might be too expensive and unknown for struggling immigrant and refugee moms. She decided to do something about it and created DENA.

As Ariel says, “The mission is to fill this critical need by working with partner organizations to spread the use of these essential baby supplies in immigrant and refugee communities. I want our newest Americans to also be healthy Americans.”