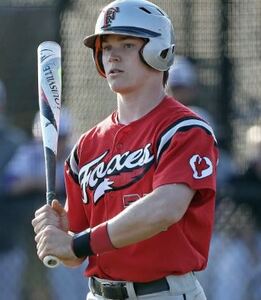 Davis, a catcher from Louisville University, was selected by the Pittsburgh Pirates with the first overall pick in the Major League Baseball Draft which took place on July 11.

The Bedford native became the first player from Westchester County to be drafted with the No. 1 pick since 1985, and the second Fox Lane student to be drafted by a professional sports team in the last 3 years.

Davis played varsity baseball for four years in high school, where he was coached by FLHS teacher Matt Hillis, and was a two-time first team all-state selection. The 6-foot-2 catcher moved on to Louisville University, one of the most highly regarded baseball schools in the country. In the 50 games he played during his college career, Davis had a .337 batting average, .435 on base percentage with 21 home runs and 84 runs batted in, while also being stellar on defense.

In college, he quickly became one of the most highly touted prospects in the nation, and, after his impressive 2021 season, he was expected to be picked with one of the top five picks in the draft. He earned All-American honors from six different publications and organizations and was a finalist for the Buster Posey Award, an annual accolade given to the best catcher in college baseball.

Davis is sure to be a critical part of the future of the Pirates, and we can’t wait to watch him succeed!

View additional photos and listen (and watch) the video of Henry Davis being drafted HERE.