Details
Published on Saturday, 16 November 2019 16:25
Written by The Ridgefield Playhouse 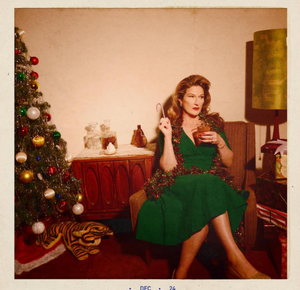 Funny lady Ana Gasteyer (“Saturday Night Live,” “The Goldbergs,” “Wine Country”) is sweetening up the holidays with the release of her new holiday album, Sugar & Booze. The collection of festive seasonal songs, classic and original, offer a swinging nod to the vintage holidays of yore with a modern touch and plenty of style. Gasteyer brings her Sugar & Booze tour to The Ridgefield Playhouse on Wednesday, December 18 at 8pm with a night of hilarious holiday cabaret that harkens back to the big-band jazz era with a modern and often comedic touch. This show is part of Northern Trust Broadway & Cabaret Series, Barts Tree Service Comedy Series and the Holiday Series. Media partner for this event is 103.7FM Danbury’s New Rock Alternative.

Sugar & Booze was produced by New York's Downtown nightclub supernova Julian Fleisher and features original songs written by Gasteyer, such as the modern nostalgic title track “Sugar & Booze,” in addition to classics like “I’ve Got My Love to Keep Me Warm,” “Have Yourself a Merry Little Christmas” and “Let it Snow.” The first song to be released from Sugar & Booze is the cheeky, woke original song with a retro-Cuban beat, “Secret Santa,” featuring Maya Rudolph.

Recorded in New York’s iconic Bunker Studios in Brooklyn, Sugar & Booze features a rollicking percussive band, a blazing horn section and is an intoxicating, merry blend of jazz, pop, soul, funk, blues and comedy that will send Holiday spirits soaring. Brimming with creative arrangements on standards such as “You’re A Mean One Mr. Grinch” and a retro Mambo “Sleigh Ride,” Gasteyer's soulful, clear vocals breathe a fresh new, and often bemused take on these beloved classics and evokes Holiday nostalgia on its original songs, such as “Nothing Rhymes with Christmas” and “Blue Black Friday.”

“We set out to make a new Holiday album with a throwback feel,” says Gasteyer. “This album is a nod to the swing sound of the ‘50s and ‘60s but with a modern twist. It is festive, with a full-bodied sound, that I hope makes people feel joyful, jolly and gay.” Gasteyer continues, “I love records from the late ‘50s and early ‘60s that never scrimped on sound. That’s hard to do in this day and age, but we sought arrangements that utilized a proper band, including horn and percussion and created as full and lush a sound. The holidays are also the one time of year we can let it rip, so we wanted to make a record that was festive, fun and celebratory. A holiday record should land on a turntable and create a warm, uplifting ambiance, leaving you free to tend bar, wrap presents and live in the magical moment.”

Sugar & Booze is the follow-up to her critically acclaimed debut album I’m Hip. Gasteyer has toured with her band, performing what she calls her 'Happy Jazz’ act since 2016, delighting audiences and critics nationwide, with her “high-octane vocals”, “a topnotch swingin’ ensemble” and “exuberant and rollicking entertainment.”  Of her two-week residency at the famed Cafe Carlyle, Stephen Holden of the New York Times raved about Gasteyer’s “strong singing voice that can stir up a storm.”

In addition to her celebrated work as a television actor and on “SNL,” Gasteyer is a trained singer who has starred in multiple Broadway and televised musicals. She starred as Elphaba in Wicked in both the Broadway and Chicago productions (earning a Jefferson Award Nomination for her performance in the latter). In 2017, Gasteyer starred in FOX’s “A Christmas Story Live!,” inspired by the holiday classic feature. In the expanded role of “Mrs. Schwartz”, Gasteyer belted out the Emmy Award nominated song “In The Market For A Miracle” which was created for her by Benj Pasek and Justin Paul. Gasteyer also starred as Mae in the movie musical Reefer Madness for Showtime and as ‘Principal McGee’ in FOX’s hit live broadcast of the iconic musical Grease opposite Julianne Hough and Vanessa Hudgens. In 2018, Gasteyer performed as Miss Hannigan in the Tony-winning musical Annie at The Hollywood Bowl alongside David Alan Grier, Megan Hilty, Lea Salonga and Roger Bart.

In addition to her album I’m Hip, her voice can be heard on the soundtracks for Reefer Madness, “A Christmas Story Live,” the 2015 cast recording of A New Brain (opposite Jonathan Groff) and the Actors Fund Benefit recording of Hair. Prior to I’m Hip, she created and toured the musical acts Elegant Songs from a Handsome Woman and Let It Rip.

For tickets ($45) call or visit the box office, 203-438-5795 or go online at ridgefieldplayhouse.org.  The Ridgefield Playhouse is a non-profit performing arts center located at 80 East Ridge, parallel to Main Street, Ridgefield, CT.