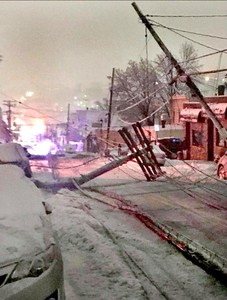 Today, after sitting through one hour of a group phone call with Con Ed and municipal officials, I had had enough.

I had listened to angry residents for six straight days. I tried to calm them down. I fought for them - visited their homes, called some. Saw the downed trees for myself; visited the warming centers on consecutive nights. I heard local Mayors and Supervisors - friends in both parties - pleading for attention and help. Good men and women who simply want to solve their people's problems. And yet, each one was left out of the decision of how to best help solve their problems. I went down to see the working men who came from Indiana and Michigan and Wisconsin and Quebec queuing up at Playland, 1,000 miles from home to help us. To risk their life with high voltage work. They're not in a corporate boardroom.

And I realized that the local officials and I are always accountable at the next election. And the top level Con Ed Management crew are barely accountable at all to their public. They can insist on following their procedures, thumb their nose at governments and the public and likely skate through this, blaming Mother Nature.

Not blaming their poor assessment of storm ferocity in advance. Not blaming their late call for mutual aid from far away; not staffing up fully in Saturday, or putting a full court press to assess the full scope of the human need and letting that influence the priority targets.

And when they set a goal, and clearly missed it.... When they had misinformation in their robocalls and in their website.... when they didn't adjust their strategies to include locals in their decision process ... I had had enough. Historically, I've worked well with Con Ed personnel on issues. Jane Skolnick and Orlando Alves and others have always been gracious and good friends.

But the rigidity at the top - the unwillingness to admit they needed to respond differently - it was Sandy all over again. And I thought about so many folk suffering so much in the dark, and in the cold, unheard by a structure that wouldn't listen to their pain.

I got criticized for quoting "Keep Calm and Carry On" but after TWO days. But after FIVE days, I'm angry. And I want to see a price paid by those who were unmoved by the suffering. Who didn't go out each of the five nights. And made decisions without feeling their pain.

So I'm not going to wait for PSC analysis I Want an acknowledgment and a contrition.!i may not get it, but I want it for all the people who aren't County Executive but who suffer tonight and can't get satisfaction.

In so many ways, my County Executive term was unexpected. I was not the likely candidate 14 months ago. I was well outspent. Less well known. Not a flamboyant pol, not a snappy dresser, don't carry an ethnic constituency or a demographic base. I don't look like "change".

But I bleed real blood for the people of this county. For some, I'm just a liberal - but they know nothing of me other than my party. I beat their guy and In the enemy.

I'm not obsessed by re election nor by running for higher office at age 64.

But by God, I'm not afraid to BE County Executive. I wasn't afraid to run in a tough race - again - and put my will up against 1,000 disadvantages. To take a negative beating in mailings and attacks and soldier through no matter what. It didn't begin in this election. It began 30 years ago in an "unwinnable" City a council race that I won. 60 years ago in the Southside of Mt. Vernon. Internet trolls touting their extreme rhetoric on line doesn't faze me - bullying people don't faze me.

I'm here now by luck or not and I'm gonna do what I think is right.

And this time, I'm right. The top crew at Con Ed must go. A new team, new attitudes of cooperation - new flexibility to win back a disaffected constituency.