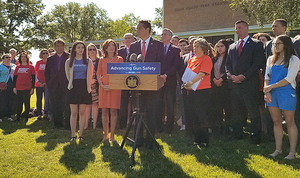 District Attorney Scarpino has been urging the Governor and our state lawmakers to push this common sense gun safety legislation through the New York State Senate and get it passed this session.

District Attorney Scarpino said, "We commend Governor Cuomo for joining us in calling on the legislature to enact the Extreme Risk Protection Order law immediately. The safety of our residents is our first concern. Often it is families and teachers who see the first red flags that someone is in crisis and may be a danger to others and themselves. Let's not wait until a tragedy happens here in Westchester to act. New York State needs a Red Flag law now before we lose another life."

Other Westchester County leaders have endorsed the bill, which would prevent individuals determined by a court to have the potential to cause themselves or others serious harm from purchasing, possessing, or attempting to purchase or possess any type of firearm, including hand guns, rifles, or shotguns.

District Attorney Scarpino added: “With ERPO as a legal tool to work with, we will take one more step in fulfilling our mission to creating a safer and healthier community.”

This ERPO bill would build on New York's strongest in the nation gun laws and prior legislative efforts, and, if passed, would make New York the first in the United States to empower its teachers and school administrators to prevent school shootings by pursuing court intervention.