Vaccination Is the Best Protection Against Measles 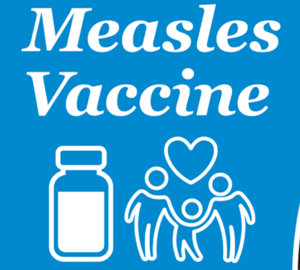 Measles is one of the most contagious respiratory diseases in the world that has the potential to be life-threatening. It is caused by a virus and is still common in many countries.

There are vaccines that provide lasting protection against measles that are proven both safe and effective. Most people who get the recommended two doses of the vaccine will never get sick with measles, even if they’re exposed to the virus.

According to the Centers for Disease Control and Prevention (CDC), before the U.S. measles vaccination program started in 1963, about 3 million to 4 million people nationwide got measles each year. Of those, 400 to 500 people died, 48,000 were hospitalized, and 1,000 developed encephalitis (swelling of the brain) because of measles. In the United States, widespread use of the vaccine has led to a 99 percent reduction in measles cases compared with before the vaccination program began.

The measles virus is very skillful at finding vulnerable people and infecting them. Particularly at risk are people who cannot get vaccinated because they are too young or have certain health conditions. After an infected person leaves a location, the virus can remain in the air and on surfaces for up to two hours and infect others. Measles spreads so easily that if one person has it, 90 percent of the people close to that person who are not vaccinated or otherwise immune will also become infected.

We can reduce the risk of measles with the Measles, Mumps, and Rubella Virus Vaccine Live (M-M-R II, commonly called MMR) approved by the U.S. Food and Drug Administration (FDA) for use in people ages 12 months and older. Just two doses of the vaccine is about 97 percent effective at preventing measles, and one dose is about 93 percent effective. Children ages 1 to 12 years may also get the Measles, Mumps, Rubella and Varicella Virus Vaccine Live (ProQuad, commonly called MMRV). This FDA-approved vaccine also prevents chickenpox.

Measles Vaccines Are Safe and Effective

The FDA plays a vital role in ensuring the safety and effectiveness of all vaccines licensed for use in the U.S., including those that prevent measles.

The measles vaccines are among the most extensively studied medical products. The safety of both vaccines has been firmly established over many years in some of the largest vaccine studies ever undertaken. Before the vaccines’ approval, clinical data developed through animal studies and human clinical trials were evaluated by FDA scientists and clinicians.

n addition, the FDA pays careful attention in reviewing the quality of raw materials and other ingredients used to make vaccines, the production process, and the procedure for assessing their safety and efficacy. Like many medical products, measles vaccines have known potential side effects, but they are generally mild and short-lived, such as rash and fever.

The bottom line is that there are safe and effective vaccines that provide lasting protection against the measles virus. Both contain live, but weakened versions of the measles virus, which causes your immune system to produce antibodies against the virus without causing you to contract the illness. Should you be exposed to actual measles, those antibodies will protect you against the disease.

Some people are concerned that autism may be linked to measles vaccines or other childhood vaccines. This belief has been refuted by medical experts worldwide. Several organizations — including the World Health Organization, the Institute of Medicine (now known as the National Academy of Medicine), and the American Academy of Pediatrics — have conducted numerous studies on the MMR vaccine. All of those studies failed to show a relationship between vaccination and autism. In fact, one of the largest studies to date, published in March 2019, provided further evidence of measles vaccine safety, concluding that the vaccine does not increase the risk of autism, or trigger autism in susceptible children.

Who Should Get the Measles Vaccine

Measles is caused by the rubeola virus. It spreads through the air when an infected person coughs or sneezes. Measles starts with a fever, cough, runny nose, red eyes and sore throat. Soon after, a rash of tiny, red spots breaks out. It starts at the head and spreads to the rest of the body. If you have these symptoms, see your health care provider for a formal diagnosis.

Measles is not a harmless childhood disease. It’s dangerous and can be life-threatening. Complications include ear infection, diarrhea, brain damage, pneumonia, and death. According to the CDC, one in every 20 children with measles gets pneumonia; one in 1,000 will develop encephalitis; and one or two in 1,000 children will die from it.

If you’re not vaccinated, it’s very easy to get infected with measles. People who contract measles are contagious for about eight days: four days before they show any signs of the virus, such as a rash, and four days after they develop symptoms. So, someone with measles might be infecting others without knowing they are sick, and they can be infectious long before they have a proper measles diagnosis.

Measles typically strikes children but can infect all age groups. Children younger than 5 and adults older than 20 are more likely to suffer from measles complications.

Immunization against measles not only protects children, it also protects other people who can’t be vaccinated, including infants and those with weakened immune systems caused by illness, such as people with cancer who receive chemotherapy.

Measles Is a Preventable Disease

There’s no specific treatment for measles. Health care providers can help measles patients with relief of symptoms and address complications, such as bacterial infections.

The most effective measure against measles is prevention through vaccination. For information about how the measles and other childhood vaccines can protect your family, visit FDA’s website and talk to your health care provider.