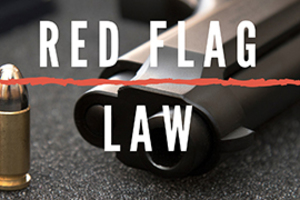 As of the school year 2019-2020, New York educators, families and law enforcement can take legal action to potentially prevent violence when they spot so-called red flags in a person’s behavior, which may indicate future violence.

The suspect student or other community members may be posting threats on social media, making verbal threats or changing behaviors that appear as warning signs to others. The law, also known as the Extreme Risk Protection Order (ERPO) law, through a judicial process, prevents individuals who show signs of being a threat to themselves or others from purchasing or possessing any kind of firearm.

According to Gov. Cuomo, this is the first red flag law in the country, which distinctly empowers school personnel to report their concerns and seek an emergency protection order based on a person’s potential actions. Early intervention, such as a court-ordered ERPO, may save lives.

The NYS Red Flag law provides all necessary procedural safeguards to ensure that no firearm is removed without due process.

New York is now one of 14 states with a red-flag law. According to EveryTown, an advocacy group,

For example, students and teachers reported that the mass shooter in the February 2018 Parkland, FL, tragedy displayed threatening behavior. His mother had contacted law enforcement on multiple occasions regarding his behavior, and he was known to possess firearms. In response to that tragedy, Florida passed its own Red Flag law.”

In February, after advocating for the passage of this common-sense gun safety law, Westchester County District Attorney Anthony A. Scarpino, Jr. said, upon the Governor’s signing,

“We are very happy the Red Flag Law is now available to safeguard New Yorkers who are a risk of using guns to hurt themselves or others. It will help us make Westchester safer and more secure. Families, community members, school personnel and law enforcement can now make a case for the courts to imposed Extreme Risk Protection Orders, to remove weapons temporarily from a person in crisis. As District Attorney, I joined other DA’s and lawmakers in calling for its passage. It is an important tool in preventing situations of mass violence in schools, workplaces, houses of worship or public spaces, and in our homes where suicide and domestic violence become deadly when a gun is involved.”

If you are concerned someone you know or love, is in crisis, has access to weapons and has exhibited signs–whether in person or through social media-he or she may hurt themselves or others, call your local police and tell them.