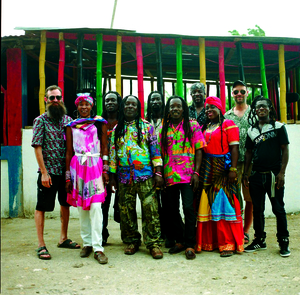 From November 14 through November 16, Purchase College, in conjunction with the college’s Office of International Programs and Services, will host the second annual (T)HERE festival, dedicated to opening a space for dialogue between people and cultures from around the world. While last year celebrated Benin, West Africa, the 2019 (T)HERE: A Global Festival of Arts, Culture & Ideas will focus on Haiti. The festival will present lectures, performances, film screenings, and art at various venues across campus including The Performing Arts Center and the Neuberger Museum of Art. All events are open to the public. The full schedule can be found at www.purchase.edu/globalfestival.

Highlights of the festival include the keynote lecture by National Book award finalist and this year’s Durst Distinguished Chair in Literature, Edwidge Danticat on Thursday, November 14. Danticat will also lead a discussion with pathbreaking contemporary Haitian journalists and media figures in the panel New Storytellers on November 15.

The Neuberger Museum of Art will present the exhibition “Art Got Into Me”: The Work of Engels the Artist. Engels, who is in residence at the museum for fall 2019, will open up his studio to visitors on November 14 and 16.

On November 15, the students of the Purchase Symphony Orchestra, Purchase Jazz Combo, and the Purchase Dance Company will be joined by local high school musicians for Haiti Alive, an evening of dance and music celebrating Haitian influences in American music in The Performing Arts Center.

Also on November 15, Atlanta McIlwraith from Timberland Corporation will be joined by Timote Georges and Hugh Locke, co-founders of the Smallholder Farmers Alliance for a discussion about their partnership to transform agriculture in Haiti.

Haitian comic book artist Thony Loui will be artist in residence during the global festival. With the help of Purchase students, Thony will complete work on the first comic book featuring his latest superhero creation, Tanama. She uses her special powers to support smallholder farmers—and women smallholders in particular—in Haiti and around the world as they overcome tremendous hardships and fight off evil forces to combat climate change through tree planting. Audiences can visit the Tanama Studio, meet the artist and check on the comic book’s progress, and can also see Thony’s art on display in the Performing Arts Center during the Festival.

The festival culminates with a spirited performance of Haitian roots music and dance by Chouk Bwa at The Performing Arts Center on November 16.

Film offerings include student films from the Transnational Filmmaking Project, which brings together film students from the U.S., Benin, and Haiti for a year of collaborative filmmaking and cross-cultural conversation. A selection of short films focusing on Haitian student directors will be screened and discussed on Friday, November 15. The festival will also feature films by award-winning artists such as filmmaker Guetty Felin and actress and director Gessica Geneus.

Food trucks and an interactive fair featuring Haitian- and American-based community engagement organizations working in Haiti will round out the festival’s offerings.

Anne Kern, Dean for Global Strategy and International Programs, said, “An nou pale Ayiti, “let’s talk Haiti” in Creole, is the guiding phrase of the second edition of Purchase’s global festival. It is an invitation to listening and open dialogue without presuming answers or conclusions, to crafting new narratives, and to honoring the artists, thinkers, and activists who help us connect Haiti’s audacious past to a more auspicious future for all.”

Haitian-born Engels the Artist, the Neuberger Museum’s Fall 2019 artist-in-residence, will welcome guests into his studio for a special meet-and-greet.

The artist and his exhibition, “Art Got into Me”: The Work of Engels the Artist, will be introduced by Patrice Giasson, Alex Gordon Curator of Art of the Americas, at 12:30pm.  Light refreshments will be served on November 14.

The exhibition is on view October 9 through December 22.

Born in Port-au-Prince, Haiti, Edwidge Danticat is the author of many books, including Breath, Eyes, Memory (1994), an Oprah Book Club selection; Krik? Krak! (1996), a finalist for the National Book Award; and Claire of the Sea Light (2013), named a book of the year by Publishers Weekly, Library Journal, National Public Radio, and The Washington Post.

Her most recent collection of short stories, Everything Inside, was published in August 2019 by Knopf. In addition to her fiction, Danticat regularly reports on Haiti, migration, and other topics for The New Yorker. Her 2007 memoir, Brother, I’m Dying, was a finalist for the National Book Award and winner of the National Book Critics Circle Award for Autobiography. Her many recognitions include a MacArthur Fellowship, honorary degrees from Smith College, Yale University, and the University of the West Indies Open Campus, and the 2017 Neustadt International Prize for Literature.

Led by Durst Distinguished Chair Edwidge Danticat, a panel of contemporary Haitian journalists and media figures will discuss the complex landscape of storytelling within contemporary Haiti, as well as the challenges of telling Haiti’s stories from the U.S.

To foster collective and collaborative dialogue, Purchase College has launched a transnational filmmaking project in which film students from the U.S., Benin in West Africa, and Haiti in the Caribbean, work together to produce short films and promote cross-cultural conversations. The program seeks to inspire young filmmakers to address art, politics, and social issues of relevance across the world.

A selection of short films produced in 2018 and 2019 with a focus on Haitian directors will be showcased during the festival and followed by a discussion with the student filmmakers.

Timberland (think boots, shoes and apparel) has become a major force in transforming agriculture in rural Haiti. Cotton is being grown again for the first time in over 30 years, with farmers planting trees to earn credits—or “tree currency”—which they use to pay for cotton and food crop seeds, tools to work the land, and much needed agricultural training.

The combined result is significantly increased yields and profits for farmers, as well as 7.5 million trees planted to date and 25 million more projected over the next five years.

Hear from the team leading this transformational venture: Atlanta McIlwraith from Timberland is joined by Timote Georges and Hugh Locke, co-founders of the Smallholder Farmers Alliance in Haiti. They will also share details of the cutting edge new data app, currently in beta testing, that tracks and measures the impact of each crop on improving farmer income, combatting climate change, contributing to food security, and supporting gender equality.

Haiti Alive highlights different intersections between Haitian folk music and the classical and jazz musical traditions. Opening with a demonstration of Haitian style bamboula drumming, the concert continues with a Purchase student jazz combo, joined by violist and composer Rudy Perrault, playing an original set based on Haitian folk themes and themes drawn from the music of Louis Moreau Gottschalk, a 19th-century American composer for whom the music of Haiti was a major source of inspiration. Following the drums and jazz, two dance soloists from the Dance Conservatory will perform George Balanchine’s Tarantella with Gottschalk’s score performed by piano soloist Steven Mayer, and the Purchase Symphony Orchestra. Haitian-American composer Rudy Perrault’s music will then be presented by a string quartet (two movements from his Zombie quartet); and the Purchase Symphony Orchestra (Exodus). The Orchestra will conclude its set with the Gottschalk's “Night in the Tropics”. The concert will conclude with the world premiere of a complete solo piano transcription of “Night in the Tropics”, written and performed by Steven Mayer.

The festival will present a selection of films reflecting the multiplicity and complexity of Haiti today, including Broken Stones, directed by Guetty Felin (2012, 61 min.) and The Sun Will Rise, directed by Gessica Généus (2018, 51 min.)

Born in Port-au-Prince, Haiti, reared in the United States and having come of age cinematically in Paris France, Guetty Felin is an award-winning Haitian-American filmmaker with a rich and eclectic background in the film and television industry in in the US, Europe and Haiti. She writes and directs and produces both documentaries and narrative films. Her films explore haunting themes such as memory, exile, foreignness, and the unending search for home, while interconnecting our common global humanities.

Her feature narrative debut, A y i t i M o n A m o u r , premiered internationally at the Toronto International Film Festival 2016 and is currently touring the festival circuit around the world. The film was bought by Orange Studio for distribution in France. It won Best Narrative Feature at the BlackStar Film Festival and was Haiti’s very first Oscar contender for Best Foreign Language Film Category for the 2018 Academy Awards. The film was widely acclaimed by the press, Variety called director Guetty Felin a "strong and distinct new voice" in international cinema. The film was recently picked up by Indiepix and will be released in July 2019. It is still touring the festival circuit with an upcoming showcase at the Fribourg International Film Festival in March 2019.

Her feature-length documentary Broken Stones on self-recovery in post -quake Haiti was selected in over two dozen festivals around the world. It garnered two grand prize awards at the Belize International Film Festival and at FEMI in Guadeloupe and broadcast on French television in 2012.

Broken Stones (directed by Guetty Felin, 2012, 61 min.): The oldest quartier in the city of Port-au-Prince, Haiti, Quartier Cathédrale (Cathedral Quarter) was the most devastated sector in the city in Haiti’s 2010 earthquake. To commemorate the eve of the quake’s tenth anniversary, the festival will revisit Guetty Felin’s 2012 film, Broken Stones, which documents the cathedral’s cracked columns and open air, the ruins resembling an amphitheater, where the daily realities of Haitian life unfold as impressionist moments interwoven into the narrative fabric of this captivating documentary.

The Sun Will Rise (directed by Gessica Généus, 2018, 51 min.): In this textured and surprising personal documentary, Haitian filmmaker and actress Gessica Généus undertakes a journey to understand what she calls Haiti’s "illness of the soul"—the country’s fraught religious divide between Vodou and Christianity. With her mother’s bipolarity as her poignant point of departure, Généus skilfully interweaves traditional interviews and ethnographic-style observation with poetic narration as she seeks to connect the dots of her family’s, and her island’s, fractured history. The result is a moving meditation on both mental illness and a nation’s as-yet unassuaged inner turmoil.

More films to be announced.

Infused with the scent and sensibility of voodoo, it is music that refuses to obscure their homeland’s deep African heritage. As they themselves declare, these are rhythms that were “torn from Africa and secretly replanted in a new land.” But this “replanting” sowed a new identity. As such, the music of Chouk Bwa is a proud statement of Haitian culture, of a nation that’s known the hardest of times but whose spirit remains as tough as those ancient drums.

Purchase College, part of the State University of New York (SUNY) network of 64 universities and colleges, was founded in 1967 by Governor Nelson Rockefeller. His aspiration for Purchase was to create a dynamic campus that combined conservatory training in the visual and performing arts with programs in the liberal arts and sciences, in order to inspire an appreciation for both intellectual and artistic talents in all students. Today, Purchase College, SUNY is a community of students, faculty, and friends where open-minded engagement with the creative process leads to a lifetime of intellectual growth and professional opportunity. For more information about the College, visit www.purchase.edu.