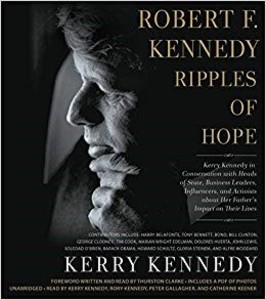 Being born into one of the most influential political dynasties in American history, Ms. Kerry Kennedy has been beautifully carrying out the examples set by her father Robert Kennedy, her mother Ethel Kennedy, her grandparents Joseph and Rose Kennedy and her uncles, President John F. Kennedy and Senator Ted Kennedy.

I had the great honor of interviewing Kerry about her new book Robert F. Kennedy: Ripples Of Hope (now out in bookstores everywhere). Here, Kerry shares her views on the state of human rights and the importance of leaving an indelible mark on the world.

1. CONGRATULATIONS on your new book! There are some incredible contributors here! How does it feel to know that 50 years after his passing RFK is still one of our modern day leaders biggest influences?

It’s inspiring to know that my father’s legacy continues to inform not just activists and political leaders, but that everyone around the world can find something empowering in his work for social justice and his moral imagination, and optimism about change.

2. When you look at today's politicians, who would you say comes the closest to following your father’s principles?

I think the world leader who most closely shares my dad’s commitment to peace and justice, and who demonstrates extraordinary courage while maintaining a cheerful demeanor is easy—Pope  Francis.

You don’t see many people doing what my father did in public life - telling Americans not just what they want to hear, but what they need to know. Speaking truth to power is a challenging act, but I see my nephew, Congressman Joe Kennedy III doing important work on health care, immigration and so many other issues. Joe shares that moral courage and creativity my father believed would make our government an example to the world.

3. One thing I’ve always loved about you and your family is how your faith in the Lord has always been an ultimate resource in igniting the Kennedy spirit. Do you feel our reliance on The Lord in our country has changed from when your uncle and father were in office and how important is it to have The Lord’s guidance in politics?

Faith is a personal journey, and each individual is going to have their own experience in finding strength or empathy. What we have seen in the decades since my father’s campaign is a weaponization of faith by political extremists in the United States, where faith is too often used as an armament weapon to divide people instead of as a source of hope that unites all of us as children of God.

4. You’ve done incredible humanitarian work as President of Robert F. Kennedy Human Rights. As you look at the state of our country today, what more do you think can be done for the benefit of human rights?

There is always something we can do - whether that means an organization like Robert F. Kennedy Human Rights going to the Texas border last month to call for an end to the Trump-Miller family separation policy, or an individual working in their community soup kitchen or helping an elderly neighbor. It’s through engagement and action that we develop the habits of compassion and respect for human dignity. Even the smallest ripples of hope make a difference.

5. Of all the work you’ve done as a human rights activist for the past 37 years, what would you say are some of your greatest accomplishments and what do you hope to achieve in the future that you haven’t already?

Let me start by saying that I am one part of a team of partners who work together to create change—and I have never accomplished anything in this field on my own.  That’s one thing I love about human rights work—it’s all about comradery and pooling resources for the greater good.  If you measure impact in terms of lives changed, then I’d have to answer with one of the many cases our team of lawyers has won, which overturned bad laws and created a more just system—like overturning the law in Uganda which made homosexuality punishable by life in prison without parole.  But what touches me most deeply is when I learn that one of our partners was released from prison or was able to escape the threat of death because of our advocacy.  It's that concrete, personal connection which I find most gratifying.

6. What advice would you give to any young people wanting to enter public service?

Now is the time. We are at an important crossroads in our nation’s history, and all around the country, we’ve seen young people getting involved, running for office, or even lending their time and support to nonprofits o activist groups. It has never been nor more important to our future to get involved.

For more information on the great work Kerry does to make the world a better place check out the RFK Center website at here.  You can purchase her book, Robert F. Kennedy: Ripples Of Hope at your local bookstore.