On the Children's Shelf: "Justin Morgan Had a Horse" by Marguerite Henry 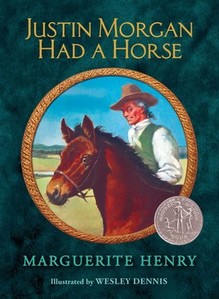 "There is something about the outside of a horse that's good for the inside of a man." - Sir Winston Churchill

I revisited a book from my childhood this week...Justin Morgan Had a Horse by Marguerite Henry. As a horse loving little girl who grew up with a great little Morgan horse, this book holds a special place in my heart.

This historical novel, a runner up for the 1946 Newberry Medal, is the story of Justin Morgan, a schoolmaster in Vermont in the 1700s who accepts two horses in payment for an old debt. He sells the bigger of the two horses, but no one is interested in the young, small horse. He asks one of his students to work with the horse, who is happy to do so. A local farmer rents the horse to clear some land, and once he sees what a strong worker this little horse is, he enters the horse in several giant log pulling contests. In this David and Goliath-like story, the young small horse beats his much bigger competitors. The farmers refuse to continue log pulling contests because Morgan's horse always wins but agree to race against him instead because strong, pulling horses are rarely fast. Morgan's little horse was special as he was as fast as he was strong and became known for all the races he won as well.

While the story is historical fiction, since not all details on Justin Morgan's life were recorded, Justin Morgan was a real person. He lived in Vermont and did acquire a smaller horse who was surprisingly strong and fast. "His ability to outwalk, outtrot, outrun, and outpull other horses were legendary" (AMHA). Morgan's horse, named Figure, passed those qualities on to his offspring and is considered the founding sire of the Morgan horse breed.

I love this story where the underdog wins. The little guy who no one thinks is special turns out to be very, very special. For any reader who knows what it's like when a horse touches your heart, this is a book you need to read.