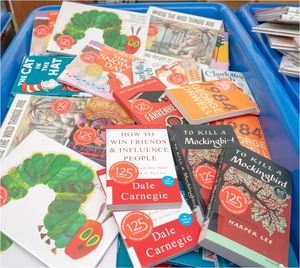 The beloved, innovative, award-winning children’s story—written and illustrated by Ezra Jack Keats—is the most checked out book in The New York Public Library’s 125-year history.

A team of experts at the Library analyzed a series of factors to compile—for the first time ever—the 10 books that have been borrowed most since The New York Public Library was founded in 1895. Today’s release of the list—as well as a limited-edition library card and MetroCard featuring artwork from The Snowy Day—launch a year-long celebration of The New York Public Library’s 125th anniversary.

The year will focus on appreciating and reaffirming the Library’s values of trust, inclusion, respect, and free and open access to information and knowledge, as well as its unique role supporting a true love of reading. The celebration will include special author talks, book lists, public programs, the much-anticipated reopening of the system’s completely renovated central circulating library, the Stavros Niarchos Foundation Library, and the opening of the Polonsky Exhibition of The New York Public Library Treasures, a permanent, free exhibition showcasing items from the Library’s robust research collections.

More information on plans is available at nypl.org/125.

To develop the list of most checked out books, the Library evaluated a series of key factors—including historic checkout and circulation data (for all formats, including e-books), overall trends, current events, popularity, length of time in print, and presence in the Library catalog. The full list:

The list also includes an honorable mention: children’s book Goodnight Moon by Margaret Wise Brown, which would have been among the system’s top checkouts if not for an odd piece of history: extremely influential New York Public Library children’s librarian Anne Carroll Moore disliked the story so much when it was published in 1947 that the Library didn’t carry it . . . until 1972.

“For 125 years, the Library has uniquely sparked, supported, and fostered a true love of reading in the people of New York City and beyond,” said New York Public Library President Anthony W. Marx. “Among our many roles, we look to connect people with the stories that capture their imaginations, take them places, stay with them over time, encourage them to keep turning pages, and greatly impact and shape their lives. The books on this list have transcended generations and, much like the Library itself, are as relevant today as they were when they first arrived. This list tells us something about New Yorkers over the last 125 years—what moves them, what excites them, what stands the test of time. It’s a perfect way to kick off our celebration of the Library’s 125th anniversary . . . and it’s just the beginning.”

The Snowy Day, in print and in the Library’s catalog continuously since 1962, is a charming, beautifully-illustrated tale of a child enjoying the simple magic that snow brings to his city. It is one of the Library’s top circulated books every year (across all neighborhoods). Andrew Medlar, director of the Library’s BookOps selection team and one of the experts who helped compile the list, attributes the book’s success to its universal appeal, its fame (being a Caldecott winner and one of the earliest examples of diversity in children’s books), its wide availability in other languages, and its many years in print.

“At the end of the day, though, it’s all about the story, and it is absolutely brilliantly told,” Medlar said. “It is such a relatable story, and pure magic for kids and adults alike. It’s on people’s radar screens, they remember when they first heard it, and they want to share that experience with their kids. And the artwork is just gorgeous.”

To celebrate the top checkout, all 92 New York Public Library locations are offering a special, limited-edition The Snowy Day library card beginning today (existing cardholders can move their accounts to the new card for a $1 donation). And a special edition MTA MetroCard will be available this week in the following 10 stations across the five boroughs:

Both special edition cards are limited and available while supplies last.

Additionally, branches will hold special storytime and craft programming around The Snowy Day in January and February.

“For The Snowy Day to be recognized as the most checked out book in the history of The New York Public Library would have been for Ezra Jack Keats, as it is for us at the EJK Foundation, the highest honor he could ever receive,” said Deborah Pope, executive director of the Ezra Jack Keats Foundation. “As a young boy, Ezra found a safe haven and inspiration in the public library. Part of his legacy has been to extend the welcome of public libraries by creating books that reflect the diverse faces of the children who use the library. The popularity of children’s books on this top ten list shows that literacy and the love of reading is a high priority for all of us in New York City’s and we, along with the beloved NYPL, are happy to help achieve this goal.”

According to Medlar, there are several key criteria that seem to influence whether a book is a top checkout: