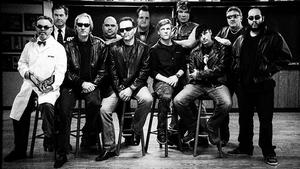 “Desolations Angels/Rise of the BOAS,” available now on Prime Video, pits a fearless band of mercenaries against the ruthlessness of a Russian mob and a Mexican drug cartel in an engaging two-hour independent film that raises the classic morality issues of Greek mythology:  Are we able to change our fate or is life predestined?

Jayson Byrd, a Westport, CT-based photographer who has shot everyone from Paul Newman to Bob Dylan, produced the film, working on location at more than 30 sites across Connecticut.

Playing a central role as a brutal Brighton Beach mob boss is Neal Smith of Westport, the founding drummer of the Rock ‘n Roll Hall of Fame group “The Alice Cooper Band.” He also created an original musical score for the film.

Byrd, the producer, is also the writer/director. He is widely known as the onetime photographer for Westport Playhouse and Connecticut theatrical locals such as the Music Theater of Connecticut, Shakespeare on the Sound in Rowayton, American Shakespeare Theatre in Stratford, Darien Dinner Theater, Stamford Playhouse and Polka Dot Playhouse in Bridgeport. He was among the original exhibitors at the Westport Arts Center.

Born in New York City, he spent his formative years traveling through Europe and developed a Continental visual sense of style, also influenced by the portrait and fashion work of David Bailey, Francesco Scavullo and Irving Penn.

His advertising photography has appeared in magazines such as Vogue, WWD, Esquire, ELLE, GQ and Town & Country. His fashion clients include Brioni, Givenchy  and Donna Haag.