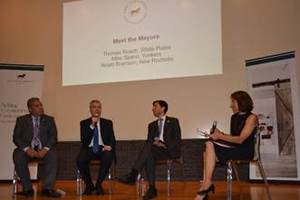 Yonkers Mayor Mike Spano, New Rochelle Mayor Noam Bramson and White Plains Mayor Tom Roach addressed about 100 real estate professionals from Houlihan Lawrence at its offices at 800 Westchester Avenue on September 16. They discussed hundreds of units of housing either under construction or in the planning stages in the three cities. Also making their cities more attractive, they said, are major infrastructure projects such as a $90 million rehabilitation of White Plains’ Metro North train station and future plans for Penn Station access from the New Rochelle.

“We thank the mayors of our cities for taking the time to educate Houlihan Lawrence on the exciting developments that are taking place in their cities,’’ said Doern. “Their leadership has helped to promote the economic health of Westchester which benefits us all.”