End of the Road for Todd's Charity Pour Tour 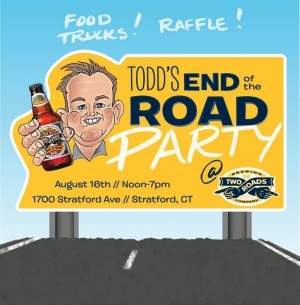 On August 16, Two Roads Brewing Company in Stratford will be celebrating the efforts of Todd Ruggere, a 40-year-old from Grafton, MA who is about to finish an eight month pub crawl during which he drank a beer in all 169 towns in the state of Connecticut to raise money for cancer research. Two Roads has been the official sponsor of Todd's CT Pour Tour in 2014 which will result in over $50,000 of money donated directly pediatric cancer research at Yale's Smilow Cancer Hospital.

Todd's quest began last year in Massachusetts, where he raised $40,000 for Dana Farber's cancer research facility by drinking a beer in each of that state's 351 towns. Two Roads and Todd agreed to make it happen again, this time in Connecticut with Two Roads supporting his efforts. Bars across the state of Connecticut have rolled out the red carpet for Todd along his journey.

"The people in Connecticut have been great and enthusiastic about my mission. At one bar in Ridgefield I raised $12,000 and at another a man came in and wrote a check for $10,000– that's a testament to how cancer touches everyone. It was amazing how many people came up to me with cancer stories and a desire to give to the cause of curing it."

To celebrate Todd's feat, Two Roads Brewing Company will be hosting an "End of the Road Party" and fundraiser at their brewery at 1700 Stratford Avenue, Stratford, CT.

The event will feature everything from a "firkin" (keg) of a special "Todd's Road 2 Ruin" beer to food trucks, live music and a raffle where people can win unique items ranging from real oak barrels used for aging beer to Two Roads neon signs and VIP group tours of the Stratford brewery. All proceeds from these activities plus 10% of all bar sales that day will go towards Todd's cause.

Todd will also be presented with more donations from local supporters and a giant pint glass will track the day's donations.

"Think of it as Derek Jeter's farewell ceremony – with beer!" said Two Roads CEO Brad Hittle. "We've supported Todd every step of the way as Connecticut came out to help. So it's only fitting that the road ends here."

About Two Roads Brewing Co: Located in Stratford, CT, Two Roads isn't just the logo on our brewery, it's our philosophy. Life always seems to offer up two ways to go. It just so happens, we prefer the one less taken and having some fun along the way. Our road less traveled philosophy is brought to life in the beers that we create and how we create them.