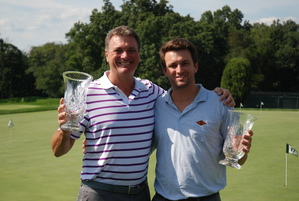 Wilton (August 12). The way Ben Jessen and his dad Brian figure it, they were due.

The Jessens of Hop Meadow Country Club have played in the Connecticut Father-Son, by their estimate, 14 times, come in third once, and had years when almost, but not all parts of their games came together. Or, years when their games meshed beautifully and somebody else’s meshed a little better.

Until Monday. The Jessens shot four-under on a tough, breezy, 6700-yard Rolling Hills Country Club course, making six birdies against two just bogeys to record the only score in the 60s, 67.

They won the 83rd Father-Son Championship handily, four clear of the nearest team, David and Evan Boggini of Manchester Country Club, who shot even par.

“We love this format,” said Brian. “It’s tough, but it’s really fun.” The Connecticut Father-Son Championship is played in a modified alternate-shot format. Both partners drive, choose one ball and play alternately from there. The Jessens, who have won the Hop Meadow Father-Son in pure alternate shot, were prepared. But a round last week at Rolling Hills in Wilton helped a lot, they said.

“We played a practice round Wednesday and that was important. But we both loved the layout. It fit our eye,” said Brian. Just as important, said son Ben, an insurance investment executive who played golf at Simsbury High and later Colgate, was, “we were both reading the speed about the same. We were on the same page. That helped. It was a day when everything came together.”

What also helped were two of Brian’s "bombs," on the 199-yard, par-3 6th, about 35 feet, and the par-4 14th, where he made a downhill-sidehill putt 18-footer with a little help from Dave Szewczul and his son Dave, who hit a putt just outside theirs on the same line first. That one ran well by.  “We knew it was going to be fast, but after watching theirs, I just touched it. It broke probably three feet to the right and just trickled down there.”  Ben's take: “Let's just say I’m glad it hit the hole.”

Brian, 59, who hits his tee shots about 250 yards, or 30 yards shorter than Ben’s, kept it in play all day and made four of the six birdie putts. Overall contributions were pretty equal, though, they said. “We were both hitting it very well,” said Brian, a pension consultant from Simsbury. “And these days if I can not stink, we’ll be pretty good. Ben’s a really good player.”

The Jessen's birdied three times and bogeyed once on each side. They started with the par-4, 372-yard second, followed at the short par-4 fifth and then at the long (199 yards) sixth, one of only a handful of 2s there all day. On the back, birdies came at the short par-5 10th, and then at the par 4s, 14 and 17. They bogeyed twice—at the eighth, where they failed to get up and down, and the 11th, where the suffered their only three-putt. “The 8th was one of the only greens we missed all day,” said Brian. “My dad hit a great bunker shot and left me about 10 feet and I missed.”

The Bogginis, who made three birdies and three bogeys, finished their round first and enjoyed two hours of the clubhouse lead and a consensus among most teams that even par would be the winning score. Rolling Hills’ greens, which have a tendency to break in a different direction than you think they might, and the length of this year’s set up, made par a very good score. The par 3s played at 201, 199, 227 and 172. Four of the par 4s measured more than 400 yards, one 458 and another 466. “It played long,” said Rob Josephson, who played with son Kevin. They shot 75 and finished T7.

John Sawka and his son Bradley, of Ellington Ridge Country Club, finished third at plus one. Defending champions Jay and Ben Conroy shot 76 (+5) and were impressed with the Jessen’s score. “Honestly, I thought even par would be enough to win,” said Ben. “Four under is a great round today.”

The Jessen's focus was actually on even par, but for one particular stretch of holes. “That stretch beginning at 6—6, 7, 8, 9, even 10 and 11, is really tough,” said Ben. “We figured that if we played that stretch of holes even, we’d be in good shape.” They made two birdies and two bogeys in that stretch on Monday and won the 2019 Father-Son going away.

So how do you celebrate a victory that comes after 14 attempts beginning back when 30-year-old Ben was just 14?