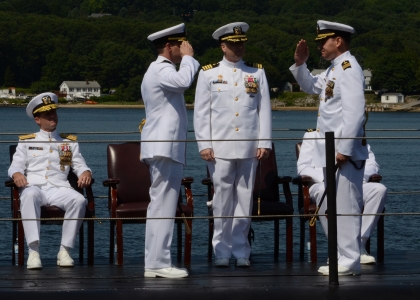 "Today's ceremony is to witness the transfer of authority for the crew, from one skipper who has expertly borne the mantle of command to another who is fully qualified as his relief," Perry said.

"Under Williams' leadership Springfield has delivered," he said. "Springfield's readiness at sea was second to none."

Springfield earned a 100-percent mission readiness grade in 2013 while operating in the Middle East, a feat that hadn't been achieved in the U.S. Central Command region since 2010.

Perry also lauded Williams for the crew's performance under his command during multiple inspections and certifications.

"Chris Williams' leadership is evident in the ship's high morale, high retention and positive results on every major ship inspection," said Perry. "His contagious zeal, professionalism and dedication to the mission carried over to Sailors throughout the ship."

Though Williams was awarded a Meritorious Service Medal in recognition of many accomplishments, he gave crew members the credit. "I'm so proud of you," he told crew members.

Williams' next assignment is in Washington, D.C. He is scheduled to serve on the staff of the Chief of Naval Operations. Lombardo reports to Groton after having left the Washington area where he served on the staff for the Chairman of the Joint Chiefs of Staff.

"I could not be more proud and excited to be taking command of such a fine ship," he said.

After graduating from Danbury High School in 1993, Lombardo attended the U.S. Naval Academy. He graduated from the academy in 1997 with a bachelor's degree in mechanical engineering. He later earned a master's in engineering management from Old Dominion University.

Lombardo has experience on both attack submarines and ballistic-missile submarines. He has served aboard USS Florida (SSBN 728), USS Tucson (SSN 770), and as executive officer aboard USS Alaska (SSBN 732).

In addition to his most recent job, Lombardo's assignments ashore have included tours at both the Office of Naval Intelligence and Anti-Submarine Forces Western Atlantic.

"I'm truly humbled to be your commanding officer," he said. "I am confident that we will continue to execute the mission with excellence as a team."

USS Springfield was commissioned Jan. 9, 1993. It is named for cities in both Illinois and Massachusetts.