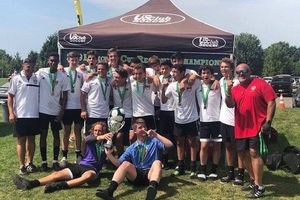 Somers own FC SOMERS BENFICA is headed to the NATIONAL CHAMPIONSHIP!!! This local U16 boys soccer team trained and played their hearts out this season and it paid off. They leave for Denver on July 18 and we’re trying to raise money to help the families offset the costs. Airline was $600 a ticket and the hotel is $155 a night. They worked so hard the entire season and played four games in four days to win the regional title earning them this trip. We thank you so much for your kind consideration for any size donation $1 or $100. Every nickel helps. Ever try to feed a 16 year old boy? lol. Try feeding 32 of them. Again we thank you. Go Somers!!

Here is the details information from the GoFundMe Page:

Congratulations to FC Somers Benfica who  won the US Club Soccer Mid-Atlantic Regional Championship and are headed to the National Cup Championship in Commerce City, Colorado in barely two weeks!! These 16-year-old boys have worked so hard and had an incredible journey this season.  College coaches have been on the prowl, and they have played their hearts out. Their efforts have really paid off. Many of them played all 90 minutes of all games thus far. These 10th graders have more heart than I don’t know who. Tired, sun burnt, and a little beat up they persevered and won! Today’s thriller was a 1-0 victory in overtime. Us parents could not be more proud.

Several new players joined the team this year. They started out getting to know each other. Week after week they won, lost, practiced, played and fought hard - and figured out ways to claw their way all the way to the top.

This weekend they played four games in four days and won all of them becoming Regional Champions! Now they will be headed to nationals in Colorado July 19-23rd looking to bring home that cup!

We are starting this GoFundMe page to raise money to help fly, feed and house all 22 players, and coaches. If you have a 16 year old boy you know how much they eat lol.

Benfica families, we also ask you to share this page with your friends and family. These boys have worked so hard. We are grateful for any size donation.

So let’s go Benfica! Let’s bring home that cup. Let’s help these boys get to Colorado. Thank you so much for your donation. Good luck to everyone!

* NOTE:  ALL funds raised will go to the team. If there are excess funds left, those funds will go towards scholarships for players in need of financial assistance.