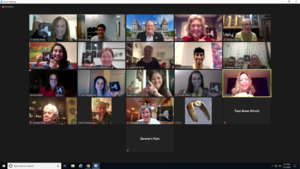 First, Reverend Martha E. Vink, rector of both Drew Methodist Church in Carmel and First United Methodist Church in Brewster, and Maureen and Rick Warren of Somers were recognized for their exceptional efforts at the food drives Harckham has hosted over the past nine months.

Also, the 14 women who called themselves the Somers Mask Army were given Commendation Awards for making and distributing more than 5,100 protective masks during the coronavirus pandemic.

“Reverend Vink, Maureen and Rick deserve our gratitude and recognition for their strong commitment to ensuring residents in our communities have enough food to eat,” said Harckham. “They are part of an amazing group of volunteers who worked at the food drives—all of them ready to contribute their time and energy to make a difference.”

Harckham organized eight food drives in 2020, working with local pantries, and collected more than 30,000 pounds of food, personal hygiene products, diapers and more, plus over $10,000 in donations. The drives were held in Sleepy Hollow, Peekskill, Mohegan Lake, Brewster, Carmel, Bedford, Pleasantville and Mount Kisco. Hundreds of volunteers helped out during the events.

Maureen and Rick Warren participated in seven of the eight food drives, and thanks to Maureen’s work in the Bedford Central School District and as a NYSUT official, she was able to mobilize dozens of volunteers from local teachers’ unions. And with Rick at the wheel of the couple’s vintage blue van (a.k.a. “Woodstock”), several tons of food from the food drives were transported to the various participating food pantries.

Reverend Vink helped coordinate the most recent food drive at her Drew Methodist Church in Carmel, and was key in helping Harckham’s office partner with the Putnam Community Action Program and the Gilead Presbyterian Church in Carmel, which were the recipients of the donations. She also volunteered at the Brewster food drive, where she unloaded and sorted donations and then helped to transport donations to the food pantry in town. Additionally, Rev. Vink was able to get dozens of members from her two congregations to volunteer at the food drives.

“The pandemic has created extraordinary challenges for all of us, and it has required that ordinary citizens step up, pitch in and do remarkable things,” said Harckham. “At a time when people were feeling down, the women in the Somers Mask Army reached out to help their neighbors. They truly deserve our thanks for their efforts.”