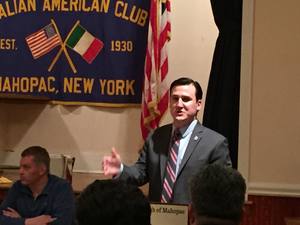 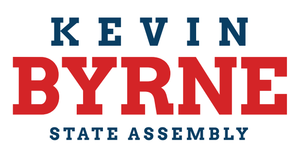 Earlier this week, Assemblyman Kevin Byrne met and spoke before a packed audience filled with members of the Putnam County Republican Committee at the Italian American Club of Mahopac for the committee's county-wide convention.

Assemblyman Kevin Byrne said, "I'm honored to once again receive the unanimous endorsement of the Putnam County Republican Committee. Despite the many challenges forced upon us from the Democrat Majorities in Albany, we've accomplished a lot for our region in a short period of time. It is an honor to serve the place I've called home my entire live. Thank you for your continued faith and trust in me as your candidate to continue serving all the hard-working people of New York’s 94th Assembly District!"

Legislator Castellano called Assemblyman Byrne "a champion for all Putnam County residents" and reminded members that it was not long ago that for the first time in nearly a hundred years, Putnam County did not have one of its own representing us in Albany. "That changed when Kevin Byrne was elected," said Castellano "and Kevin have been doing a fantastic job representing us ever since."

Legislator Gouldman thanked the Assemblyman for his continued service to the district and called him a "long-time friend" who understands the needs of our area.  "We are fortunate to have people like Kevin Byrne represent us in Albany. He's someone who stands up for our first responders, police, firefighters and EMS, as well as our military veterans. He's someone who gets it," said Gouldman.

Councilman Lombardi called Byrne "a tremendous advocate for the people of Carmel and Putnam County. We need him in Albany fighting for us."

Since first being elected to the Assembly, Kevin Byrne has risen among the ranks within the state Assembly. He is the current chair of the Assembly Minority Program Committee, as well as the ranking member on the Assembly Committee on Health, and remains an active member of the Transportation, Insurance, Labor and Government Operations committees.

In less than three years, Byrne has introduced and passed over a dozen pieces of legislation addressing various local needs for our community, eleven of which have already been signed into law by Governor Andrew Cuomo, demonstrating his ability to work with people from all political backgrounds. Assemblyman Byrne lives in Mahopac with his wife Briana, who has a busy career as a Physician Assistant, and their rescued Treeing Walker Coonhound Tracker.

Assemblyman Byrne is halfway through his second two-year term serving in the Assembly. The 94th Assembly District includes the towns of Carmel, Patterson, Putnam Valley, and Southeast in Putnam County, as well as Yorktown and Somers in Westchester County.

A Westchester Republican Committee Convention is scheduled for February 25th and a formal campaign announcement is scheduled for March 14th in the Hamlet of Carmel. You can learn more about Assemblyman Byrne and his campaign at www.Byrne4NY.com