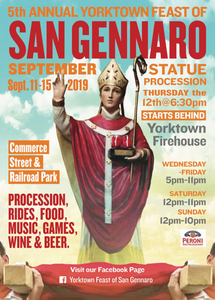 The popular Yorktown Feast of San Gennaro, continues through Sunday!

And Don't Leave The Feast Without Our Famous Zeppole!

Made On Site Before Your Eyes And Sold By St. Patrick's Church As A Fundraiser

Starting At 7 P.M., It's Saturday Night Live Music Tonight! Get A Load Of This Feastful Of Great Live Italian And American Music For Your Listening, Dancing, And Sing-Along Pleasure!

Bring A Chair If You Want, And Enjoy The Music, The Food And Drink, The People, The Beautiful Night, The Games, The Rides, The Good Vibes!

LOUIS VANARIA
Singer/actor Louis Vanaria has recorded two CDs, performing favorite Italian-American songs, plus jazz standards and contemporary music with his band that plays on live gigs as well, where he has opened for Jay Leno and Connie Francis. As a film and TV actor, Louis began his career as “Crazy Mario” in the film A Bronx Tale, directed by Robert DeNiro. He can be seen in HBO series The Deuce, as “Dino Cervelli,” opposite James Franco, and as “David Ferrie” in the forthcoming DeNiro movie The Irishman. He also has acted with Sinatra in the movie Young at Heart, in HBO’s Boardwalk Empire, and in TV series that include Law & Order, Blue Bloods, and others.