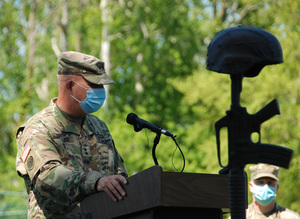 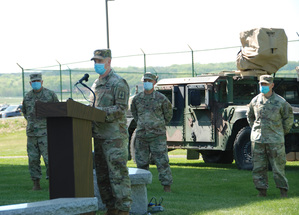 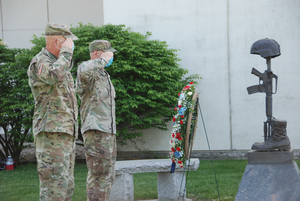 The short ceremony featured a bugler, the singing of the National Anthem, remarks from the Adjutant General, and the placing of a wreath at the New York National Guard memorial to fallen Guardsmen at New York State Division of Military and Naval Affairs Headquarters in Latham, N.Y.

What was missing, though, was the crowd of 300 or so Soldiers, Airmen, and civilian employees who normally show up in front of the headquarters building for the annual ceremony.

Instead, the Memorial Day ceremony was taped so it could be posted online, and the Adjutant General and other participants wore protective facemasks.

The goal, Shields explained, was to continue to recognize the importance for Memorial Day-especially for military members-while still abiding by the health guidelines laid down by New York Governor Andrew M. Cuomo.

The governor has encouraged communities and groups to recognize Memorial Day, but he has also asked them to do so in groups no larger than ten people.

The standard ceremony was redesigned to reflect those mandates.

Along with eliminating the audience, the moving parts of the traditional ceremony were changed so participants could stay six feet apart, explained Major Josh Heimroth, the executive officer to the Adjutant General. The number of moving parts were kept to a minimum, he said.

Instead of marching the Color Guard into place, the flags were already in position when the ceremony started. Only the narrator, the Adjutant General, and the Chaplain had to move during the ceremony. The wreath presentation was also simplified.

"This is definitely a usual Memorial Day, one that we will not soon forget," Shields said.

"Normally our annual remembrance of the men and women who gave their lives for our nation is an all hands on deck affair. Today, May 22, 2020, there are only a handful of us here to pay tribute to our fallen service members," he said.

But it is important to remember what Memorial Day is about and so it is fitting that the New York National Guard's leaders conduct a ceremony, Shields said.

Memorial Day weekend will not be the same either, he noted.

What will continue, Shields said, is the sense of duty and need for mission accomplishment that motivates members of the New York National Guard.

There will still be 3,500 Soldiers and Airmen on duty across the state this weekend responding to the COVID 19 crisis, he added.

"Perhaps in an odd way, with everything closed on Monday, it will give us more time to reflect on the sacrifices made by so many to defend our country," Shields said.

Since the attacks of Sept. 11, 2001, 39 New York Army and Air National Guard Soldiers and Airmen-7 Airmen and 32 Soldiers-- have lost their lives in Iraq and Afghanistan. The most recent casualties occurred in 2018 when a HH-60 Pave Hawk rescue helicopter flown by the 106th Rescue Wing crashed in Iraq.

The New York National Guard currently has around 800 personnel deployed overseas. Six hundred of those Soldiers and assigned to the headquarters of the 42nd Infantry Division which is commanding Army forces in the Middle East.