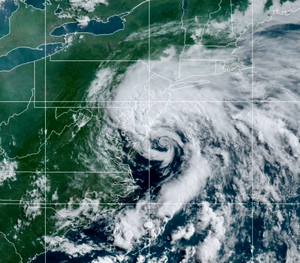 The National Weather Service (NWS) has issued a Flash Flood Watch for the Mid-Atlantic states and New England through midnight tonight. Tropical Storm Fay was centered just off the southern New Jersey coast at approx 1:30 this afternoon and was moving north, bringing heavy rains to the NYC area and its suburbs.

A flash flood watch means that conditions are favorable for flash flooding.

Residents are usually urged to do the following when flash flooding is imminent:

In New Jersey, flooding has prompted the shutdown of the George Redding Bridge in Wildwood and Ocean City, Maryland has already seen over 5 inches of rainfall as of noon today.

Tropical Storm Fay will move north along the Jersey Shore Friday afternoon and then move inland over the lower Hudson Valley by Friday evening. Rain will spread from the Jersey Shore into parts of eastern Pennsylvania, central and eastern New York and southern and western New England.