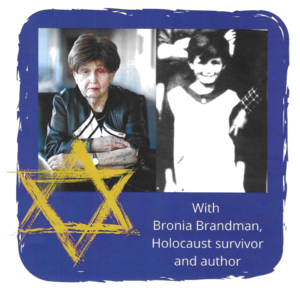 Please register HERE in order to have access to this presentation. You will receive an email prior to the meeting with a Zoom invitation.

Presented by the Museum of Jewish Heritage

A Living Memorial to the Holocaust:

Bronia Brandman was born into a family of six children in Jaworzno, Poland. She was eight years old when World War II broke out. In March 1942, her oldest brother was taken to Blechhammer labor camp. The following August, her parents and another brother were deported to Auschwitz, never to be heard from again. She and her three sisters fled to the nearby town of Sosnowiec, where they stayed for a few months before the Nazis relocated them to a ghetto. In August 1943, the four sisters were deported to Auschwitz. Ms. Brandman narrowly escaped the gas chambers by running away from her assigned line upon arrival and joining one of her sisters in another line. Her sister soon developed typhus, however, and the Nazis sent her to the gas chambers shortly thereafter. Ms. Brandman remained at Auschwitz until January 1945, when she began a forced death march to Germany. Though sick and delirious with fever, Ms. Brandman survived the trip and was liberated from the Neustadt-Gleve camp by the American and Russian armies in May 1945.

Today, she is a retired public school teacher, volunteering her time as a member of the Speakers Bureau of the Museum of Jewish Heritage—A Living Memorial to the Holocaust.

You will be interested to know that Bronia was invited to meet President Biden at the White House for International Holocaust Remembrance Day. This program was generously supported by the Friends of the Somers Library.

Our programs are supported by the Friends of the Somers Library through our patrons' generous contributions.