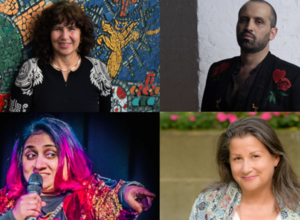 Discover the power of personal stories, as storytellers share their own experiences on the theme of "tradition interrupted" in the KMA's Sculpture Garden. Event followed by reception. Members $20. Non-members $25.

Valentina Ortiz is a multilingual storyteller, musician, writer, and humanitarian. Her stories are full of hope and offer a window into the daily life of the people of Latin America.

Srilatha Rajamani is a New York-based queer storyteller and comedian. Her stories are about her life and its absurdities and the joys of being an Indian immigrant woman living in the United States.

Angela Derecas Taylor is a second generation American of Italian and Greek descent. She hails from the 1960’s Greenwich Village, where she was raised in a family of restauranteurs, leading her to a 20-year career in hospitality and the restaurant business; eventually segueing into a mid-life career change to work in community service, local government, and as a Yoga instructor.

Fury Young is a multidisciplinary artist from Manhattan’s Lower East Side. From a young age, Young was surrounded by film, music, and poetry, and was inspired by his grandfather who was a defense attorney, and his father who was a community activist and artist.