The Exonerated is Vital Viewing at the Ridgefield Theater Barn 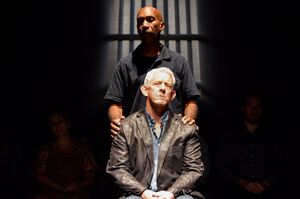 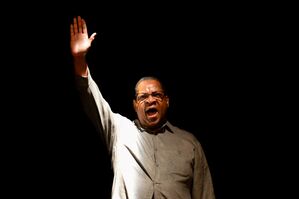 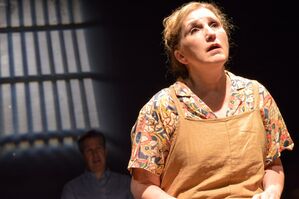 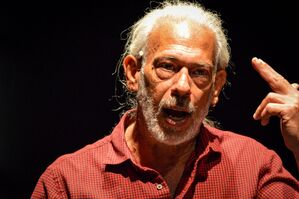 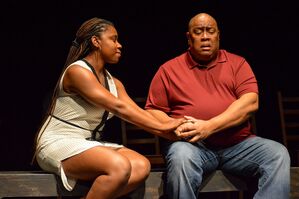 There is a practice in storytelling where, when there is unsettling information, we tell the end first: the people are safe, the damage was repaired, the animals are alive: epilogue as exposition. We assure the listener that what they are about to hear may be difficult but the message is important. The Exonerated, a play by Jessica Blank and Erik Jensen, which opens the 2022-2023 season of the Ridgefield Theater Barn (RTB), is compiled entirely of interviews and legal documents of six Americans falsely accused of murder and sentenced to death, and is intrinsically set up in this way. The audience has the luxury to skip the ethical rollercoaster usually present when discussing matters of crime and incarceration, and focus on the performance. We are prepared from the beginning that no matter what justice was miscarried unto these six humans, the innocence that is supposed to be presumed from the start was eventually restored and they are here to share their experience— be it as cautionary tale, as catharsis, or as simply one more moment to breathe the oxygen of freedom and try to gain that much more footing on an unsteady life.

The Exonerated stage is sparse, operating nearly as a black box, a single gobo of a barred prison window looms; freedom is visible and just out of reach. The performers enter through the audience and take their seats, group-therapy style, in a horseshoe. One by one, they move into the center of this fishbowl to share their stories. We are witness to their memory and the judicial trauma inflicted upon them. They will interact with a spouse, a sibling, or the echoes of players from their cases–lawyers, police officers, the actual perpetrators of the crimes, but relive how they were imprisoned, what they endured, and how they emerged.

Scenes in the performance weave gracefully, the characters connecting to each other with a gesture, a glace, a steadying hand to braid the individual voices together, with Kevin Knight as “the poet” Delbert Tibbs as a weaver, a low-key guide to the evening. The audience may come to the presentation with judgements and fears, and Knight functions as the interruption; he shakes that loose and sets us back down so that we may hear with open hearts and clear minds. Knight is the first to address the audience, in lyrical prose that disrupts, then settles. He behaves as one who has been out of prison the longest, and guides us through these lives, how we may take the momentum of their impact to bring forth change to the broken.

We then meet David Fritsch as Gary Gauger, a down-to-earth farmer with remnants of the revolutionary 60s still present in his disparaged spirit, and learn his nightmare of being wrongfully convicted of parricide. Fritsch carries Gauger through the grief of losing his parents and the compounded horror of then being sentenced for their murder. He maintains Gauger’s despondence and can navigate wit and hope, strengthened through his interactions with his wife Sue, played with sweet, hopeful pluck by Paulette Layton.

Next to share his story is George Croom as Robert Earl Hayes: the horse groom from Mississippi convicted of rape and murder of a fellow groomer, and Kendall Driffin as his bright and gregarious wife Georgia. Croom is present in every moment of Hayes’s life and conveys his strength, heartache, rage and dreams with a beautiful balance of gravitas and levity that is riveting. This year brought developments in Hayes’s real-life case which may mean revisions to future productions of this show, but Croom steers his narrative with the fully realized humanity of a man who has endured racism: systemic and structural, and knows his character flaws do not justify his treatment. We root for him, feel his fire, and hold space for his voice.

Layton later serves as a barometer of characters’ geography as she moves from the “dontcha-know” of the midwest to the drawling Texan charm of Sandra, the grounded wife of Christopher Cooney’s Kerry Max Cook. Cooney paints Cook with all the hues of a grown man who is still fighting to maintain his light through the unreleasable trauma of his incarceration as an eighteen year old, and the compounding tragedies he endured as a result. The audience gets a taste of the Texas prosecutor’s unfiltered feelings about gay folks (as Cook’s sexuality was incorrectly identified, following him into prison with horrific consequences). Of note here is Matt Pagiaro, who as one of the ensemble has to rapidly shift from racist cops, to slimy defendants, and arrive in a whole other persona as Cook’s upstanding older brother Doyle, all solidly.

David Michael Tate as David Keaton then shares his story of wrongful conviction of killing a police officer; he is yet another eighteen year old snatched up and threshed by the criminal justice system during the time in a young person’s life that should be full of ambition and adventure. Tate carries Keaton’s beatific demeanor with the pain of wounds inflicted on a soul level throughout the production. Even when acting as an ensemble voice, he physically remains in Keaton’s spirit, compressed into his chair, navel gazing through clasped hands, and he is acting on another cosmic plane. Given the real Keaton passed away in 2015, he may very well be. Keaton is spiritually guided throughout his life, and Tate calls upon a holy reservoir to embody this spiritual conduit with earnestness.

Priscilla Squiers serves as the lone female character on death row, portraying the aptly nicknamed Sonia “Sunny” Jacobs who, along with the father of her children: Jesse Joseph Tafero (separate trials, same judge), was convicted and sentenced to death for the murder of two law enforcement officers after the actual killer implemented them in a perjurious deal with the prosecutor. Squiers maintains a bright optimism in Jacobs, sprinkling wit and hope amidst her heartache. Her scenes with Timothy Huber—who is able to shift ensemble gears with great speed and accuracy, providing the necessary foils in the stories of our protagonists with complete commitment—as the ill-fated Tafero are plaintive and precious, making her story all the more tragic upon its culmination.

When we learn how each of the characters’ cases are overturned, The Exonerated gives us the opportunity to examine if and how we may galvanize our collective strengths to fight against the wrongful incarceration of innocent people. Knight as Delbert provides us with the adage that when our car isn't working, we don’t ask what is right with it but see what is wrong; we work on what needs to be fixed. We still need our car, just as we still need the American judicial system. It is the work of the American people, that while we may love our country, we are permitted to examine those parts that need repair, and find the way to do so for the highest good. The talkback following the performance echoed this, featuring two speakers who were wrongfully incarcerated who touted their faith, friendship, and the Innocence Project in staying in their peace and working toward their freedom. The men shared their stories, validated the perspectives from the characters in the performance, and offered the audience the rallying cry to not waste time when working for justice.

Directed by Elizabeth Young, The Exonerated has been on deck for three theatrical seasons at RTB, the actors and production team working while they waited to bring this important production to life. Executive Director Pamme Jones asserts that between the stress induced by the pandemic and the recent uptick in social injustice, this show has never been more relevant. So relevant, in fact, that as of this writing, the importance of examining the criminal justice system by reviewing cases for bias, error, and questionable evidence proved vital in the vacated murder conviction of Adnan Syed, whose case received renewed attention due to the podcast Serial hosted by journalist Sarah Koenig of the New York Times. Perhaps his story may find itself in a revival of The Exonerated, and if RTB staged the production, it would be in excellent hands.

The Exonerated runs through Thursday, Friday, and Saturday evenings at 8PM and Sundays at 5PM until September 25, 2022 at the Ridgefield Theater Barn, 37 Halpin Lane, Ridgefield, Connecticut, recommended for mature audiences. It is presented without intermission, runs about ninety minutes, and includes a talkback following each performance. Masks are optional as Connecticut mandates allow. Doors open one hour prior to the show for the audience to bring food and drink to enjoy. Tickets available at ridgefieldtheaterbarn.org or by calling the box office at 203-431-9850. For more information, email This email address is being protected from spambots. You need JavaScript enabled to view it.