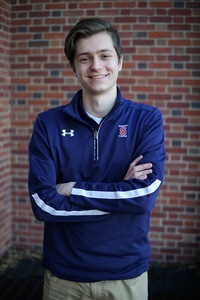 This year's recipient, of the Bob Fitzsimmons Scholarship is Peter Astriab, a senior at   High School in White Plains, NY.  It will be awarded to him on Stage at Westchester Broadway Theatre on Friday, August 16, 2019.

Peter Astriab is from Yonkers, New York and attended Archbishop Stepinac High School in White Plains. He was a part of the National Honor Society and graduated with a special diploma recognizing him as a graduate of the Health Sciences Academy at Stepinac. Peter enjoys community service and always tries to lend a helping hand when he can. He is fluent in Polish and loves to travel to different countries to explore and embrace cultures around the world. Peter has been playing piano for 12 years, singing with choirs in places like St. Patrick’s Cathedral, and acting with the Stepinac Drama Club for four years, playing roles such as Peter in Peter and the Starcatcher, Race in Newsies, and most recently Mario in the National High School Premiere of A Bronx Tale for which he was nominated at the 2019 Metropolitan High School Theatre Awards. In a few weeks, he will be starting college at St. John’s University in Queens majoring in Biomedical Sciences, but he plans to keep acting and singing close to his heart and a part of his everyday life. He is excited to see what the future has in store for him as he takes this important step in his career.

The Scholarship is given annually to a college-bound senior who has excelled in the theatre arts programs while attending Stepinac High School. The prestigious Arts Scholarship is named after Bob Fitzsimmons, a graduate of Stepinac High School, who died suddenly at the age of 37 in March of 1992. He was the Public Relations Director of the Westchester Broadway Theatre, as well as a gifted actor, producer, writer and a director of shows at WBT and at numerous theatres throughout the County.
The scholarship was established in his name by the owners of Westchester Broadway Theatre, Bill Stutler and Bob Funking, the entire employee staff of WBT, and the many friends and relatives of Bob Fitzsimmons.

Under the auspices of WBT, Allan Gruet, (former WBT Public Relations Director, who replaced Bobby Fitzsimmons) and George Puello spearheaded two fundraisers. The first & most successful fundraiser was held at WBT, the second was held at Stepinac High School.  Mr. Puello was responsible for directing & producing the entertainment portion of the events, while Mr. Gruet handled the ticketing for the fundraisers & the continuing administration of the self-sustaining scholarship. Over the years, along with the assistance of producer Bob Funking, Allan has continued to manage the scholarship, making it possible to present the award consistently each year. In recent years, Frank Portanova, Vice Principal of Stepinac High School, has been extremely helpful and cooperative, making some financial donations to the fund to help ensure the life of the scholarship. He also is responsible for selecting the student winner for this highly competitive award. Since its inception, $25,000.00 in scholarships have been awarded. Unfortunately, due to the current financial climate, the Scholarship is no longer self-sustaining and monies need to be raised to ensure the continuation of this award. The annual scholarship in Bob's name is our collective way of keeping alive the memory of our dear friend, Bobby Fitzsimmons.