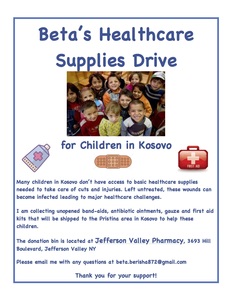 Elizabeta Berisha, a rising senior and honors student at John Jay High School, has created a healthcare supplies drive to benefit underserved children in Kosovo. She has donation bins set up at several local pharmacies throughout Northern Westchester including the Jefferson Valley Pharmacy located at 3693 Hill Blvd, Jefferson Valley, NY.

Beta’s father is from Pristina, the capital of Kosovo. Beta developed the idea to help these children after hearing about her cousin becoming ill when visiting family in Kosovo. Her cousin was taken to the hospital and it was almost impossible to find a thermometer to take her temperature. It was then that Beta realized that the country where her father grew up and emigrated from lacks the basic healthcare supplies needed to live a normal life.

Beta also realized that when children get cut and injured, the community does not have the essential necessities like band-aids and antibiotic ointments to keep lacerations from becoming problematic.  Left untreated, these open wounds can become infected leading to major healthcare challenges that her dad’s community is not equipped to deal with.

Beta approached several drug stores in the area asking if they would support her efforts by allowing her to set up donation bins with signage explaining her drive to collect unopened band-aids, antibiotic ointments, gauze, thermometers and first aid kits that she and her father will bring with them in October when they travel to Kosovo. Beta is so appreciative of how supportive and embracing the pharmacy owners have been to her request. For example, Dan Becker, the owner of Jefferson Valley Pharmacy is very supportive of Beta’s drive and was one of the first pharmacies to set up a bin for donations in his store.

As Beta says, “When I see my little sisters and brother get cuts and scrapes, we don’t think twice about having the ability to get what we need to treat them.  I can’t imagine how a parent in Kosovo must feel when their child gets hurt knowing that they are not able to treat them properly.”

Local stores that are supporting Beta’s wound care supplies drive with donation bins include Cross River Pharmacy in Cross River, NY, Jefferson Valley Pharmacy in Jefferson Valley, NY, and Pound Ridge Pharmacy, Pound Ridge, NY. In order to create awareness in the areas of these local drug stores, Beta is going around to neighboring shopkeepers asking if they will display her flyer explaining her drive and the population it benefits.

Beta’s goal is to collect over 200 wound care products through donations. If Beta collects more supplies than she and her father can physically bring to Kosovo, she will contact a shipper to send over the remaining donated supplies.  Beta’s wound care drive will be going on until the end of September.