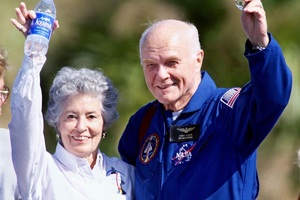 Annie Glenn an advocate for speech disorder impaired people and the widow of U.S. Astronaut John Glenn, passed away on Tuesday May 19, 2020 in a Minneapolis, Minnesota nursing home at the age of 100. The official cause of death was listed as complications due to Covid_19.

Annie Glenn struggled with a chronic stutter and sometimes had to write notes to others instead of speaking. She bravely went on the campaign trail for her husband John in 1964 when he ran for the senate. In 1973, then in her 50s, she underwent a new treatment at the Communications Research Institute which cured her stutter. She then devoted herself to helping those with a stutter and other disabilities. She was recognized by the American Speech and Hearing Association in 1983 for “providing an inspiring model for people with communicative disorders.”

John and Annie Glenn were high school sweethearts but grew up together in the same New Concord, Ohio neighborhood. They continued dating through college. They were married in 1943  and remained married for the next 73 years, until Senator Glenn's passing at age 95 in December of 2016.