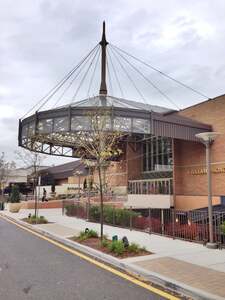 Danbury Police Chief Patrick Ridenour said investigators initially did not think the girl (injured in the incident) was associated with either group involved in an altercation that led to the shooting, he clarified Thursday that security footage revealed she was with one of the groups. However, he said it remained unclear whether she was the intended target.

Ridenhour said Thursday the security footage showed it was a male shooter, possibly in his early teens, with a thin build and shoulder-length dreadlocks.

“We are very confident that he will be identified very soon. We encourage him, however, to turn himself in as soon as possible,”

A 16 year old female was wounded in an altercation between two groups of youths last evening at the Danbury Fair Mall. Original reports on social media suggested there was an active shooter situation at the mall just after 7:00 p.m.

Danbury Police along with officers from Bethel, Brookfield, Putnam County, NY Sheriff’s Office and the FBI responded to the scene.

Shoppers were advised to shelter in place while authorities searched the mall for the shooter and through their investigation found that there had been an altercation between two groups of youths inside the mall near Macy’s and found an injured 16 year old female outside the mall who suffered a chest wound in the incident.  Videos posted to social media show kids running outside and a large police presence outside the mall. Danbury Police described her gunshot wound as “non-life threatening” and said the victim was conscious and alert when they arrived.

A spokesperson for the Department of Emergency Service, announced around 9:00 p.m., that the situation did not appear to be an active shooter or a mass shooting situation.

Late Wednesday night, police were still investigating the incident and no arrests had been made at this time, but they were using video surveillance footage to develop a possible suspect in the shooting.

In press conference late last evening, Danbury Police Chief Patrick Ridenour said “It appears she was innocent. It appears there was another target," said Chief Ridenhour. "We do have some information that a male was running from the scene carrying a hammer. We believe he may have been the target but she got in the way."

The mall was locked down immediately following the shooting and people were seen slowly leaving beginning at about 8:30 p.m. People were still being released at 10 p.m.

Due to her age, Police have not released the victim’s name and her current condition has not been made public at this time.