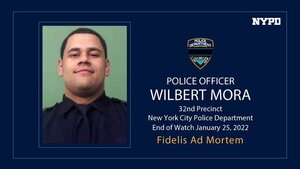 Wilbert Mora, the New York City police officer injured in a shooting in which his partner Jason Rivera was killed last week, passed away from his injuries earlier this afternoon, NYC officials said.

"Wilbert is 3 times a hero. For choosing a life of service. For sacrificing his life to protect others. For giving life even in death through organ donation. Our heads are bowed & our hearts are heavy."

"Wilbert Mora was a hero," Adams, who is also a former former police officer, said in a statement. "He served his city, protected his community and gave his life for our safety. Our hearts are heavy. Our city is in mourning. To his family, loved ones, and brothers and sisters in the NYPD: Your city is standing with you today and always."