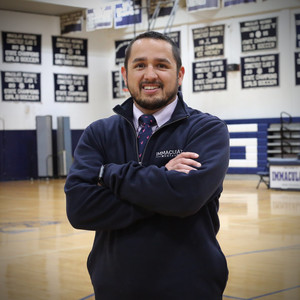 Beginning in the 2019-20 season, Immaculate High School will return to an independent ice hockey team with a new coach and an excited commitment to build an independent team and take on the challenges of the highly competitive world of Division 1 high school ice hockey.

Winning Head Coach Brian Lugo will lead coaches and team members to put on their skates and new Mustang uniforms and take to the ice at the Danbury Ice Arena for practices and games beginning next winter. The team played as a co-op for several years with New Fairfield High School and went from a DIII to a DI classification when they earned a 13-5-3 record two years ago. Now, with many returning skaters and an experienced coach, the independent Mustang team is poised for another successful season.

Lugo has coached from mite level hockey through the junior level.  When he was the coach for J.W. Mitchell High School in Port Richey, FL, the team won the State Championships two out of three years, and the team also went on to win Nationals and now has many players currently playing D1 and D3 college hockey with one player drafted into the NHL.  Also, in 2013 his U16 travel team won Nationals, and he coached the first Midget team in Florida to ever win Nationals. Back up in the Northeast, Lugo coached for the Yale Youth team in 2018 and his U12 team won States while his U14 team won States and then went on to win New England Regionals.

“The co-op team was a great experience and allowed student-athletes to play on a high school team, and we are grateful for all that New Fairfield High School athletics and players contributed to the team and its high level of play,” said Coach Lugo. “The goal now is to build the chemistry in one school and one place the players can call home and find the perfect balance between academics and athletics.  Being an independent team allows the players the opportunity to better compete for State titles,” he said.

Lugo’s goal for the first year is to teach the new systems and style of hockey the team will be playing.  “Immaculate High School has a great reputation for academics; my goal is to bring and build up a program the school can be proud of.  “‘Will always beats skill, unless skill works with will.’ I want to build a program that supports the school as well as have huge community involvement, including among alumni.  We want the community to see what the players are doing, and come out and support a program the city, as well as parents and alumni, can be proud of and see the legacy continue,” Coach Lugo explained.

Lugo pointed out that the team already has some great assets in place, including a “fantastic” locker room, an equipment repair and sharpening center and a nutrition area, and an arena that will be refurbished under new management. “We will train harder than ever before, and we take players that want to succeed and put them in a system that gives them the opportunity to succeed, and make everyone proud,” he said.

Lugo began coaching ice hockey 18 years ago when his son, who now plays for Post University, began playing the sport. He is now happy to take his talents, experience and excitement to the return of the independent Immaculate High School Ice Hockey Team, where the student-athletes, parents, alumni and school staff have already welcomed him.