Details
Published on Thursday, 21 May 2020 10:08
Written by Westchester County 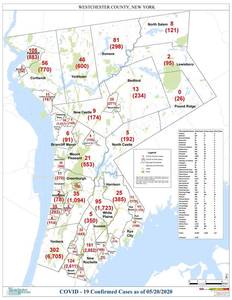 Standing on the newly rehabilitated runway at Westchester County Airport, County Executive George Latimer announced that Runway 16/34 will reopen full length and width for aircraft operations on Thursday, May 21 at 8 a.m. The main runway closed for rehabilitation on April 27 during an extreme downturn in aviation activity at the Airport, with the goal of completing the project with little to no impact on flight activity once Airport operations returned to normal. By completing the Runway 16/34 Rehabilitation Project during this time frame, paving operations were shortened from three months to three weeks, with as much as 6,000 tons of asphalt placed in one day.

Westchester County Executive George Latimer said: “We are here to announce the completion of a major capital project that we were able to do faster and for less cost than planned. We knew that we were going to have a major drop in air travel due to the coronavirus outbreak and the ability to move this project and get it done in a directed period of time has saved the County money and some distribution for those that live in the area.”

Airport Manager Peter Scherrer said: “As a result of the extreme downturn in flight activities worldwide, we have taken the opportunity to advance the construction schedule of the Runway 16/34 Rehabilitation Project. This efforts significantly reduces the overall construction schedule and improves the quality of the final pavement surface, which ultimately extends the service life of the runway.”

Commissioner of the Westchester County Department of Public Works & Transportation Hugh Greechan said: “The decision to move up the Runway 16/34 Rehabilitation Project enabled us to shorten paving operations from three months into a three week time frame. By completing the repaving during the Airport’s closure, the need for the installation and removal of temporary runway pavement during normal airport operations has been eliminated.”

Runway 16/34 and the intersection that connects the runways were both closed for construction and repaving. The construction had originally been scheduled for later this fall, but the decision to move up the project was made to reduce any impact on flight activity during normal Airport operations. Any remaining construction that needs to be completed will take place during overnight hours, and the final completion date of October 10 has been moved up to mid-August.

View the County Executive's full briefing at this link: https://youtu.be/IHP9ETJdQg4