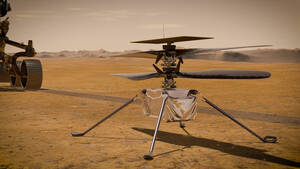 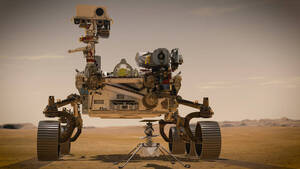 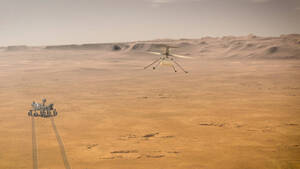 The first helicopter attempting to fly on another planet is a marvel of engineering. Get up to speed with these key facts about its plans.

NASA’s Perseverance explorer will land on the red planet on Feb. 18 carrying an innovative experiment: the Ingenuity Mars Helicopter. Ingenuity may weigh only about 4 pounds but it has some outsize ambitions.

"The Wright Brothers showed that powered flight in Earth's atmosphere was possible, using an experimental aircraft," said Håvard Grip, Ingenuity’s chief pilot at NASA's Jet Propulsion Laboratory in Southern California. "With Ingenuity, we're trying to do the same for Mars."

Here are six things you should know about the first helicopter going to another planet:

1. Ingenuity is a flight test.

Ingenuity features four specially made carbon-fiber blades, arranged into two rotors that spin in opposite directions at around 2,400 rpm – many times faster than a passenger helicopter on Earth. It also has innovative solar cells, batteries, and other components. Ingenuity doesn't carry science instruments and is a separate experiment from the Mars 2020 Perseverance rover.

2. Ingenuity will be the first aircraft to attempt controlled flight on another planet.

What makes it hard for a helicopter to fly on Mars? For one thing, Mars' thin atmosphere makes it difficult to achieve enough lift. Because the Mars atmosphere is 99% less dense than Earth's, Ingenuity has to be light, with rotor blades that are much larger and spin much faster than what would be required for a helicopter of Ingenuity's mass on Earth.

It can also be bone-chillingly cold at Jezero Crater, where Perseverance will land with Ingenuity attached to its belly in February 2021. Nights there dip down to minus 130 degrees Fahrenheit (minus 90 degrees Celsius). While Ingenuity's team on Earth has tested the helicopter at Martian temperatures and believes it should work on Mars as intended, the cold will push the design limits of many of Ingenuity's parts.

In addition, flight controllers at JPL won't be able to control the helicopter with a joystick. Communication delays are an inherent part of working with spacecraft across interplanetary distances. Commands will need to be sent well in advance, with engineering data coming back from the spacecraft long after each flight takes place. In the meantime, Ingenuity will have a lot of autonomy to make its own decisions about how to fly to a waypoint and keep itself warm.

3. Ingenuity is a fitting name for a robot that is the result of extreme creativity.

High school student Vaneeza Rupani of Northport, Alabama, originally submitted the name Ingenuity for the Mars 2020 rover, before it was named Perseverance, but NASA officials recognized the submission as a terrific name for the helicopter, given how much creative thinking the team employed to get the mission off the ground.

"The ingenuity and brilliance of people working hard to overcome the challenges of interplanetary travel are what allow us all to experience the wonders of space exploration," Rupani wrote. "Ingenuity is what allows people to accomplish amazing things."

In careful steps from 2014 to 2019, engineers at JPL demonstrated that it was possible to build an aircraft that was lightweight, able to generate enough lift in Mars' thin atmosphere, and capable of surviving in a Mars-like environment. They tested progressively more advanced models in special space simulators at JPL. In January 2019, the actual helicopter that is riding with Perseverance to the Red Planet passed its final flight evaluation. Failing any one of these milestones would've grounded the experiment.

5. The Ingenuity team will count success one step at a time.

Given the firsts Ingenuity is trying to accomplish, the team has a long list of milestones they'll need to pass before the helicopter can take off and land in the spring of 2021. The team will celebrate each time they meet one. The milestones include:

And then Ingenuity will make its first flight attempt. If the helicopter succeeds in that first flight, the Ingenuity team will attempt up to four other test flights within a 30-Martian-day (31-Earth-day) window.

6. If Ingenuity succeeds, future Mars exploration could include an ambitious aerial dimension.

When NASA's Ingenuity Mars Helicopter attempts its first test flight on the Red Planet, the agency's Mars 2020 Perseverance rover will be close by, as seen in this artist's concept.
Credits: NASA/JPL-Caltech
Full image and caption

Ingenuity is intended to demonstrate technologies needed for flying in the Martian atmosphere. If successful, these technologies could enable other advanced robotic flying vehicles that might be included in future robotic and human missions to Mars. They could offer a unique viewpoint not provided by current orbiters high overhead or by rovers and landers on the ground, provide high-definition images and reconnaissance for robots or humans, and enable access to terrain that is difficult for rovers to reach.

"The Ingenuity team has done everything to test the helicopter on Earth, and we are looking forward to flying our experiment in the real environment at Mars," said MiMi Aung, Ingenuity’s project manager at JPL. "We'll be learning all along the way, and it will be the ultimate reward for our team to be able to add another dimension to the way we explore other worlds in the future."