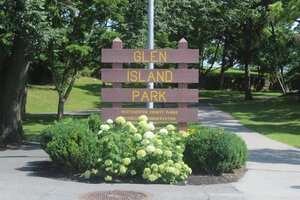 Glen Island seawall, pavilions and sidewalks that were damaged from Superstorm Sandy have been fully restored. The 7.9-million dollar capital project began in 2015 with design work and construction began in 2018. The project was reimbursed by FEMA.

As with any capital project, the first phase consists of a lot of planning and design work and this particular project included an extra layer of planning and coordination with FEMA, as they provided additional insight regarding the damage and how to fix it.

The seawall is important to the preservation of the land as it prevents erosion from waves and serves as an armor to the land. The vertical walls around the Harbor Club and the walkway along the seawall were hit the hardest. The rehabilitation of the seawall along with its bulkheads required major construction in order for it to get back to a place where it can do its job protecting the land properly. In addition to the seawall and the surrounding sidewalks, two pavilions, located on each side of the beach were severely damaged and are now completely repaired.

The project paused in 2020 due to the pandemic and the turning over of Glen Island to the state to become a drive-thru testing facility. It picked back up in time for the reopening of Glen Island earlier this summer.

Westchester County Executive George Latimer said, “The impact Superstorm Sandy left on Glen Island Park was devastating. The years of hard work and labor that were put into its rehabilitation were necessary not only to see the park flourish again but to protect the land. I’m thrilled that it has been completed in time for the park’s reopening and for the summer months for residents to enjoy.”

Westchester County Parks Commissioner Kathy O’Connor said, “I’m excited to see the rehabilitation of the seawall complete and residents using the pavilions again. It has been a long road to recovery and it couldn’t have come at a better time.”