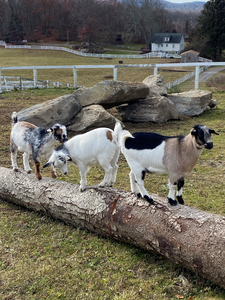 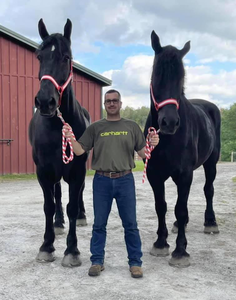 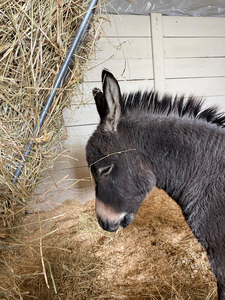 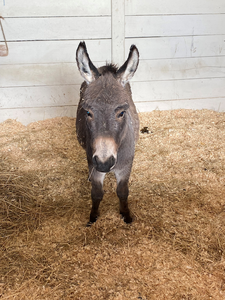 There are all sorts of new creatures – great and small – at the Tilly Foster Farm and Educational Institute.

In October, Tilly Foster Farm on Rt 312 in Southeast, welcomed Truman and Diesel, percheron horses that each weigh about 2,400 pounds and tower over their trainer. Some weeks later, a few baby Pygmy Goats took up residence at the farm. Then, in December, a couple of miniature donkeys joined the crowd.

“People from all over will bring their children to Tilly Foster Farm to learn about our new animals,” MaryEllen Odell, Putnam County Executive, said “Our new horses, goats and donkeys also serve as part of the Animal Care educational program we developed with Putnam Northern Westchester BOCES. Three classes a day of students come to Tilly Foster Farm to learn how to train and care for our farm animals.”

The size difference among the farm’s newest residents isn’t the only distinction among them. They each have their own personality, said Lisa Walker the assistant farmer at Tilly Foster.

Truman and Diesel are Percheron, the gentle giant of horse breeds. As draft horses, they are known for their strength and stamina.  Percheron are often seen pulling carriages or giving hayrides. The horses are on loan to the county by the Blumberg family of Brewster.

The baby Pygmy Goats, named Winter, Clarice and Tip Toe, were donated to the county by Muscoot Farm in Somers, where they were born in April. Pygmy Goats grow to about 65 pounds.

“They are incredibly playful and friendly,” Walker said.  “They are the silly goats you see climbing on rocks and bucking and joking around. People do Yoga with Pygmy Goats. They’ll stand on your back nibble at you. They are very curious.”

The farm’s newest residents are Sardinian Donkeys named Darius and Dante. These are miniature donkeys whose breed hails from the island of Sardinia in Italy. They grow to between 30 and 50 inches tall.

Darius and Dante were donated to the county by Garrison residents Nancy Olnick and Giorgio Spanu, the founders of Magazzino Italian Art, the museum in Cold Spring. The couple donated the donkeys to Tilly Foster Farm for education purposes and for the public to view.

These donkeys have a long and storied lineage. Their ancestors came from Sardinia to Massachusetts in 1936. Then the pair of original donkeys were moved to Texas, where Chip and Voyle, each a parent of one of Tilly’s new donkeys, were born. Chip and Voyle arrived at Nancy and Giorgio’s farm in Cold Spring N.Y. in 1996.

Darius’s father is Chip and Dante’s mother is Voyle.  The rest of the herd of donkeys can be visited at  Magazzino.

Darius and Dante are still adjusting to their new surroundings, but will probably be ready to leave the barn and meet the public sometime in January, said Chris Ruthven, deputy commissioner of the Putnam County Parks Department.

“We wanted the public to see and interact with them,” Ruthven said. “They’re vocal animals and they’re fun for the kids to look at.  They are known to protect other animals. I suspect they will be looking out for the Pygmy goats.”

Tilly Foster Farm and Educational Institute, on Route 312 in the Town of Southeast, is free and open to the public every day.