$8.7 Million Improvement Project for the North County Trailway in Westchester 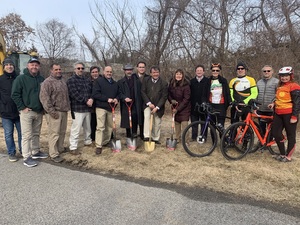 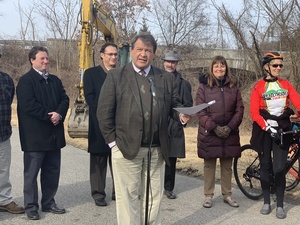 Westchester County Executive George Latimer said: “I am pleased that we will be able to make long-awaited improvements to this tremendously popular trail. This will be the first major construction project on the trail since it was first built in the 1980’s. It will be a win for all of us who enjoy the trail when it is finally restored to like-new condition.”

Commissioner of the Westchester County Parks Department Kathy O’Connor said: “This Trailway provides a great place to walk, jog and bicycle nearly year round. It is a great asset to our County Parks system. I look forward to its restoration.”

Westchester County Legislator Margaret Cunzio said: “I am very excited to see the evolution of the North County Trailway. This path is one of the gems of the Westchester County Parks system, and enables residents and visitors to experience the outdoors and stay active.”

President of the Westchester Cycle Club Christine Schopen said: “This trail is a great resource for the Westchester Cycle club. We are really proud of it, it’s beautiful and we use it all the time. Every level rider in our club has been on the trail. We really appreciate that it’s going to be repaired so we can use it safely.”

The North County Trailway was built along the Putnam Division railbed of the former New York Central Railroad, known colloquially in its day as the “Old Put.” The line provided freight and passenger service between the Bronx and Putnam County from 1881 to 1958.

The North County Trailway traverses the towns of Mount Pleasant, New Castle, Yorktown and Somers. It connects to the South County Trailway, which runs to Westchester's border with the Bronx.

The project is expected to take approximately 14 months to complete.

Click here for information about the Westchester Trailways and Putnam Trailway.