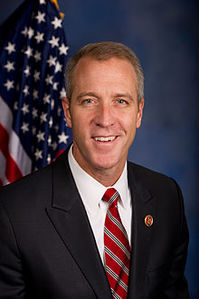 Last week, the House of Representatives passed the Moving Forward Act, a $1.5 trillion infrastructure bill that will make our nation's highways, bridges, transit, rail, airports, ports, and harbors safer, smarter, and made to last. Rep. Sean Patrick Maloney (NY-18), a member of the Transportation and Infrastructure Committee, successfully fought to include his amendment blocking Chinese State-Owned Enterprises from accessing U.S. transportation funds in the Moving Forward Act.

“My amendment is simple: hard-earned, American taxpayer dollars and transportation funds shouldn’t go to China. As China works to exploit this pandemic for their gain, our national security and economic recovery is at risk. We can’t afford to turn a blind eye to these actions as we start to rebuild and reopen America,” said Rep. Sean Patrick Maloney.

The Chinese government, under President Xi, works to undermine the American economy through the use of State-Owned Enterprises, or SOEs. The Chinese see major transportation and infrastructure projects as an opportunity to expand the country’s reach in U.S. infrastructure, supply chains, and markets. The Transportation & Infrastructure Committee has examined the danger SOEs pose to our national security and international strength, and has been warned that Congress must act to provide a whole-of-government response to this threat.

Rep. Maloney’s amendment to the Moving Forward Act would ensure Chinese State-Owned Enterprises are not eligible to receive American highway dollars, transit dollars, and rail dollars. The amendment was included in the INVEST in America Act, and passed as part of the larger infrastructure package yesterday.

Rep. Maloney has a longtime history of speaking out against China’s overreach and threats to national security. In October of 2019, China took the extraordinary action of denying visas to Rep. Maloney’s bipartisan American congressional delegation. He was barred from the country for one reason only — his planned visit to Taiwan. He was outspoken about his delegation’s treatment and denial into the country. He has also been outspoken about China’s brazen efforts to undermine America’s national security and has led hearings on this urgent issue as Chair of the Subcommittee on Coast Guard and Maritime Transportation.

Additionally, the Congressman serves on the House Permanent Select Committee on Intelligence, which held a virtual hearing this week on the ways China is exploiting the global pandemic and the pandemic recovery to advance its long-standing sovereignty claims and push their economic interests. The House of Representatives also passed the Hong Kong Autonomy Act on Wednesday, imposing mandatory sanctions on entities that violate China’s obligations to Hong Kong under the Joint Declaration and the Basic Law, taking an important step toward ending China’s campaign of suppression and intimidation waged against the people of Hong Kong.