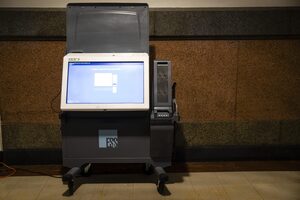 Common Cause/NY and a group of New York state lawmakers are demanding the New York State Board of Elections (NYSBOE) reject the certification of the ExpressVote XL -- a touch screen voting machine that would allow voters to mark their ballot electronically instead of on the traditional voter-marked paper ballots -- later today. The NYSBOE is expected to hear public comments on the machine and then vote to either certify or reject them after.

Cyber security election experts almost universally pan the touch screen technology, so much so that most states have switched back to voter-marked paper ballots. The ExpressVote XL, which uses Windows 7, is also about to become even less secure as Microsoft announced last year that it will no longer be providing software updates for the program. The machine also only prints ballot verifications in English, violating New York State Election Law. The Daily News editorialized against these machines.

"There is no common sense or legal justification for permitting taxpayer money to be spent to purchase outmoded voting machines with known security issues and vulnerable to new security risks. Computers, like the ExpressVote XL which run elderly, long-superseded operating systems or software, are truly outmoded before they are even purchased," writes Susan Lerner, Executive Director of Common Cause/NY in her public testimony.

"The New York State Board of Elections (NYBOSE) should vote down the certification of the ExpressVote XL. In the middle of a pandemic, New York should not be spending millions of dollars on insecure, hackable and obsolete machines. The fact that this machine does not allow non-English speaking voters to independently verify their vote is a fatal flaw under NY Election Law. We are jeopardizing our future elections by allowing counties to purchase these machines. New York should stick with the gold standard - voter marked paper ballots which voters themselves place in a scanner. As lawmakers, we have worked tirelessly to reform New York's election laws -- this would be a huge step backwards," said Assembly Members Ron Kim, Yuh-Line Niou, Emily Gallagher, Sarah Clark, Linda Rosenthal, Robert Carroll, Anna Kelles, Amanda Septimo, and Harvey Epstein, and Senator Liz Krueger.

"All across the nation, we are seeing how even the fairest elections are but one pillar protecting our fragile democracy. Voter suppression is at an all-time high, and extremist politicians are capitalizing on potential vulnerabilities in our electoral system. We rely on our local and state Boards of Elections to protect each and every single vote cast in our country," said Assemblymember Catalina Cruz. "On Thursday, the New York State Board of Elections will decide whether or not to certify the ES&S manufactured ExpressVote XL voting machines. As many advocates have warned, this machine is highly problematic: it produces unverifiable results, has malfunctioned in other states in recent elections, and, perhaps worst of all, cannot even print non-English ballots. There are no circumstances under which the State Board of Elections should authorize this substandard product for use in our elections, especially at a time when voting rights are under assault. New York cannot take a step backward and allow the use of an unreliable machine that cannot be trusted. No way, no how, no ExpressVote XL.

Currently, Senator Myrie and Assemblywoman Paulin have legislation in the New York State legislature that would ban the use of hybrid voting machines like the ExpressVote XL.