WOMAN DIES WHEN HER VEHICLE ENTERS THE HUDSON RIVER 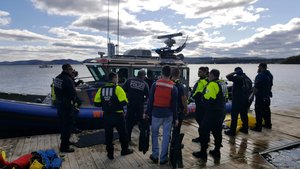 The vehicle entered the river from a boat ramp in a Town of Cortlandt park off Riverview Avenue. The circumstances of the incident are under investigation by County Police detectives.  The identity of the deceased, who is in her 30s, is being withheld at this time.

Westchester County Police responded to the area at 12:45 p.m. after receiving reports that a car had driven into the river and become submerged.  Patrol, Marine Unit and Aviation Unit officers searched for the vehicle with assistance from the New York State Police and the Verplanck, Montrose and Croton-on-Hudson fire departments.

The vehicle had drifted from where it initially entered the water and was located nearby in about 10 feet of water.  Dive team members removed the deceased from the vehicle, which remains in the river but will be removed.

The County Police Forensic Investigation Unit also responded to process the scene. The Westchester Medical Examiner’s Office will determine the cause of the woman’s death.